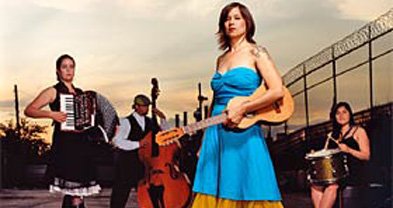 Sound description: Call it cumbia, call it norteño, call it ranchera rock, or call it what the band itself calls it -- "Latin alt-folklórico."

Co-founded by San Diego native Sandra Dos Santos (aka Sandra Velasquez), Pistolera is named after a DC Comics supervillain, an assassin and sharp-shooter from the Batman family of comic book titles.

Velasquez grew up in North Park, where her parents were still living as of 2011. “In high school, I played music but not anything serious. It was nothing that went anywhere. I just played with whoever wanted me in their band.” After graduation from USD High, she remembers performing on keyboards at the Casbah with Tripod Mack and the Wife. “Ben Johnson was in the band. He and his brother have a band now called the Long and the Short of It. I think he actually works at the Casbah these days.”

A dedicated rocker kid, Velasquez fondly recalls seeing all-ages shows in San Diego by Sonic Youth, Mudhoney, and Clikitat Ikatowi. Yet she says it was her mom (immigration and human rights attorney and law professor Lilia Velasquez) who gave her bearings early on.

"At age 13, my mother put me to work in her law office...helping political asylum applicants fill out paperwork and escorting undocumented workers to the INS building to turn in their forms. She was always on TV being interviewed for the latest on immigration. She would leave the country once a month to be part of a delegation of people that were investigating or reporting on human rights conditions in other countries."

Velasquez graduated with a music degree from Cal Arts in Los Angeles and then left for Cuba to study drumming and dancing. She landed in Brooklyn iNew York in 1999. “When I got there, I said, this is my place.” She laughs. “In San Diego, I always felt a little frustrated because it was just so laid back. I felt like you had to work twice as hard to get anything done.... Not everybody wants to come and live a hard life in Brooklyn. Sometimes, you want to live in a nice house and go to the beach and also play your gigs.”

"I immediately was in shock by the fact that I couldn't find good Mexican food [in New Yorl]," says Velasquez. "How hard is it to make a good taco? That's when I realized how much Mexican people, food, and music were a part of me -- when it wasn't there anymore."