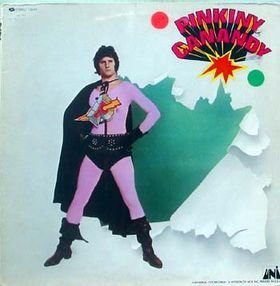 Sound description: Brilliant but obscure pop gems, akin to the best of the 1960s.

“Capitol Records popped my band’s cherry but didn’t call the next day or even send us flowers,” says Chain. “They were building us up as their replacement for the Beatles, but then we got dropped and had nowhere to go but down.”

Pinkiny Canandy's single 1969 album on the long-gone Uni label is one of the 1960s most perfect (and most nearly forgotten) pop rock masterpieces. Nowhere on the album is Chain's real name mentioned, and few connected him to the now-obscure Pinkiny project until tracks first resurfaced on the Bubblegum MF compilation series.

The band also featured Gary Kato, from a great group called the Merry-Go-Rounds, and their big 1969 tour was masterminded by promoter Mike Tell, future husband of actress Patty Duke. The album and superheroic alter-ego may be almost completely (and criminally) forgotten, but Pinkiny Canandy once opened for Led Zeppelin at the Las Vegas Ice Palace on August 11, 1969.

“With all their stuff crowding the stage,” recalls Chain, “finding an open spot wasn’t easy. Zeppelin intimidated you with their equipment.… A family of six could’ve lived in John Bonham’s drum set. We set up our equipment in front of theirs. We now knew how saplings felt in a giant redwood forest.”