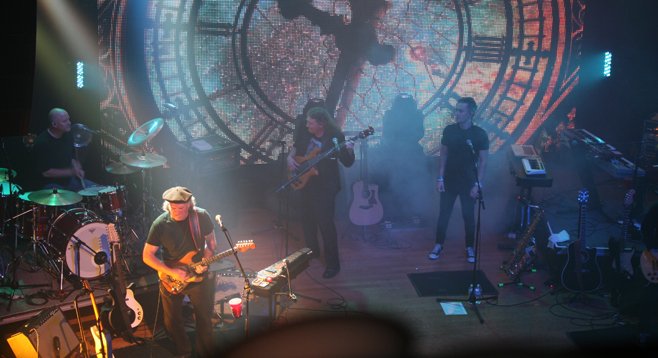 Pink Froyd and the Pink Floyd Experience are fronted by guitarist Tom Quinn, with both bands usually featuring the same local players, including co-founding bassist Gus Beaudoin. “Our first gig was in 1995,” says Quinn, who was inspired to form the groups after seeing the real Pink Floyd at Jack Murphy Stadium in April ’94. “If I wasn’t playing Pink Floyd covers, I can’t imagine me doing any other tribute.” Pink Froyd won San Diego Music Awards in 1999 and 2000.

The project grew from merely ambitious to epically elaborate, thanks to an infusion of production capital. “In February 2003, Annerin Productions, based in Calgary, Alberta, flew down to see us at Winstons in Ocean Beach, in the middle of a torrential downpour,” says Quinn. “They auditioned us that night to be the featured band in a world-class theatrical production they had in mind at the time. We signed on shortly thereafter and had our world premiere up in Calgary on October 15, 2003, and since then we’ve been touring North America every year.”

The Pink Floyd Experience stage show includes $2.5 million worth of production equipment, mirror balls, a circular movie screen, animated projections (marching hammers, tortuous teachers, fornicating flowers, etc.), and even a 12-foot-long inflatable pig, with everything scaled down from, though directly based on, Pink Floyd’s stage setups.

“We’re usually on the road, though we occasionally play in San Diego,” says Quinn, who graduated SDSU in 1988 with degrees in Finance and Electrical Engineering (“Never worked a day in either field”).

Asked about the most difficult Floyd song, Quinn cites “‘Dogs,’ from the Animals album. My favorite to play, but the most challenging to get it right over the entire 17 and a half minutes with the proper attitude and inflections.”

Singer Graham Heath was with the band from early 2004 through September 2010, having been with Pink Froyd since 1999. In May 2011, Heath filed a lawsuit against Quinn and Pink Froyd/Pink Floyd Experience band reps Annerin Productions and Jeff Parry Promotions on seven counts, including: Common law appropriation of name or likeness; Breach of contract; Defamation; False light; Termination in violation of section 6310(A) CA Labor Code and CA OSHA/Occupational Safety and Health Act.

Heath’s lawsuit alleged that Quinn and fellow band mates liked smoking pot in their hotel rooms, with his complaints resulting in Termination in Violation of Labor Code and Cal-OSHA.

“I have been a member of both bands since the beginning,” Gus Beaudoin told the Reader in July 2011. “Since I haven’t been named as a defendant, so far, I’m not required to follow a lawyer’s advice to keep my mouth shut...I wish I could address all of the allegations now, but the truth will be revealed eventually. The main thing I want to get straight now is the fact that the decision to replace Graham was made by all the members of the bands.”

A North American tour for the group ran over five weeks and twenty-seven cities, beginning February 8, 2013, in Springfield, MA.