Padre Joe and the Foul Balls 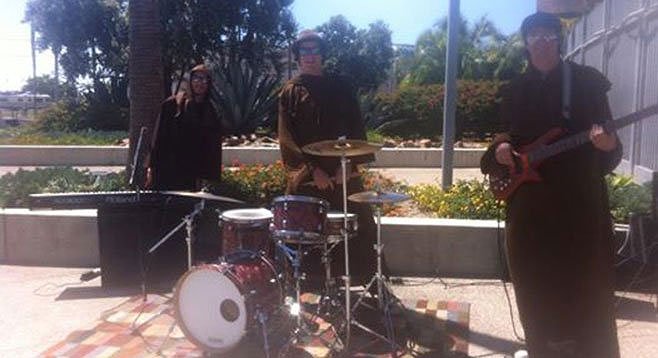 Padre Joe and the Foul Balls is a robe-wearing trio featuring bassist Zachary Wheeler and his brother Josh Wheeler on drums (both of Scarlet Symphony), along with Joe Guevara on keys. They began playing for baseball crowds at Petco Park in 2011.

“We play in front of the home-plate gate, on the south side of the park where that bridge goes across,” says Zachary. “It’s the more ghetto side.” He says they power up a small PA system and wail just outside the ballpark’s gates to incoming baseball fans and an endless stream of East Village characters. “We’ve seen news cameras filming us, but I’ve never seen us on TV.”

This same trio (minus the Friar’s robes) worked as the house band at Prohibition in the Gaslamp as a jazz-rock-blues band called Piano Joe and the Bootleggers.