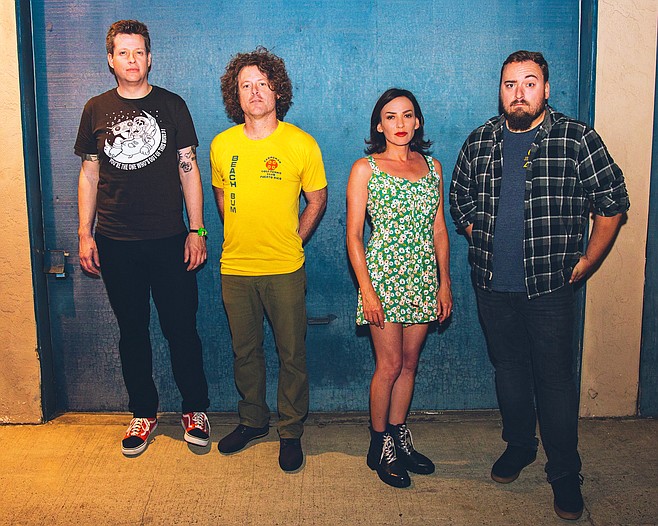 Sound description: Their music has been likened to the Breeders, Love and Rockets, or “a less drugged-out Spiritualized.”

Based in Carlsbad, the Oxen features a couple of midwesterners and a Texan playing indie pop in sunny San Diego. Husband and wife team John Vineyard (of Dallas' 20-plus member choral rock band Polyphonic Spree) and Jozette Vineyard (who was once part of the Omaha punk scene) met at a 2006 Lady Dottie and the Diamonds show at the Tower Bar.

As of 2017, the duo was backed by a pop-punk drummer from Cleveland's the Interns, Matt Nelson, whose local bands include Heart Beat Trail. Bassist James Molden played his last show with the group at the Casbah on May 4, 2017, with drummer Matt Nelson leaving that October.

"I believe it is my time to take a step back and refocus on family, my personal and professional growth, and my emotional and psychological well being," said Nelson on Facebook. "The rest of the band doesn't appear to intend on missing a beat (bad pun, sorry). I can't definitively say what those plans are at this point in time, but I do know that we have a wealth of material recorded, a full length LP forthcoming, and a new drummer, undoubtedly, in the band's near future." That drummer turned out to be Ryan Mack (The Thens).

When their debut full-length was released in September 2019 (preceded in August by their first video, for "Earthbound"), Jozette and John Vineyard were being backed by Kevin Shumway (bass) and Greg Stone (drums). Recalls John Vineyard, "Although some of the drums and bass were recorded at Rarefied Recording Studio in San Diego, the Oxen opted for a DIY approach to the majority of the recording and mixing. “Twice a week we would haul our recording gear down and set up a makeshift recording studio in the back room of a barber shop that we rented out. We’d set up microphones, crank up the guitars, and play for four or five hours, then break it all down and see what we had once we got home.”