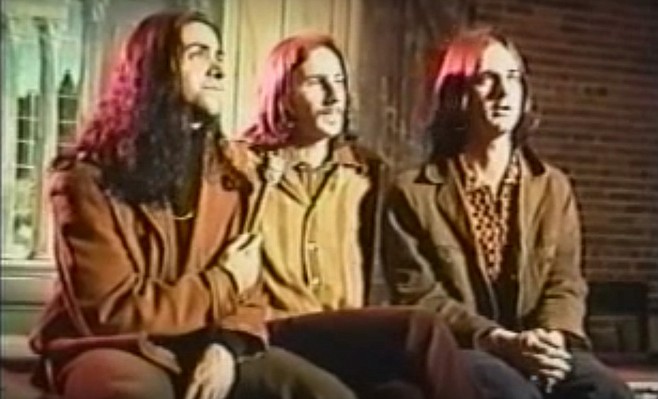 The band formed from the ashes of a group called R a h! that featured Rony Abada and Gary Jules, soon joined by Michael Andrews and Topper Rimel. While still in high school, they recorded a 1985 single with producer Matt Silver and engineer Mike Harris at Western Audio in Santee, "Music To My Ears" b/w "Staff And Glove," released on the Pop Records label.

In the late 80s, multiple San Diego bands found themselves courted by record labels in the midst of a flush musical marketplace looking for the Next Big Thing. Augmented by new keyboardist Daniel Silverman, the Origin opened for touring headliners at local clubs like the Bacchanal, the Belly Up, and elsewhere, playing well-received all-original sets that attracted the interest of several companies. They signed with Virgin Records.

Gary Jules was no longer with the Origin when their self-titled debut album was recorded at Powertrax Studios in Hollywood, with producers David Kershenbaum and Paul McKenna. The album was released by Virgin in 1990, spawning three singles: "Everyone Needs Love" (UK only), "Growing Old" (which reached #19 on Billboard's Modern Rock Tracks on the strength of a popular video), and "Set Sails Free" (also shot as a video). The album track "November Days" earned airplay on U.S. college and alternative radio and the album won an RMS Music Society Award for Best Album of the Year.

After the band relocated to San Francisco, a followup called Bend came out in early 1992, produced by Jeffrey Wood and sporting a cover drawn by bassist Topper Rimel. Though the album featured keyboardist Daniel Silverman, he quit the band before the subsequent support tour (opened by Toad The Wet Sprocket) and was replaced by Todd A. Davidson. A single for "Bonfires Burning," for which a video was shot, reached number 17 on the Billboard Modern Rock Tracks chart.

The band seemed on the brink of breakout success when they turned up in a New Artist Spotlight on an April 1992 episode of ABC's TV show In Concert. Andrews and other band members were interviewed on camera as clips from two of their videos unspooled, in between segments hosted by Ringo Starr that featured David Bowie's Tin Machine and Morrissey. It was unbeatable mainstream exposure.

However two months later, in June 1992, Virgin Records was sold to EMI and the band was dropped from its roster. A planned second Bend single for "Waiting" was only released as a promo CD, a video for "Bend" appears to have gone unaired and unseen, and by the end of the year the group had split.

As local music historian Bart Mendoza tells the Reader, "All of the bands from that short blast of major label interest - Voices, Lions & Ghosts - had potential, but they got lost in label politics and band problems. Same thing when MCA signed up Joey Harris, Four Eyes, and Trees a couple of years earlier."

Andrews -- aka Elgin Park -- later worked on Brendan Benson’s One Mississippi and Jason Mraz’s Waiting For My Rocket To Come In, as well as scoring the film Zero Effect (which includes music by locals the Greyboy Allstars) and releasing solo albums. Gary Jules gained fame for his cover of Tear For Fears' "Mad World" in the Donnie Darko film scored by Andrews.

Daniel Silverman changed his name to Daniel Cage and released solo albums, as well as scoring films. Bassist Topper Rimel played with Robots in Disguise from 1994 through 1998 before becoming a fashion designer. Drummer Rony Abada reportedly relocated to Brazil.