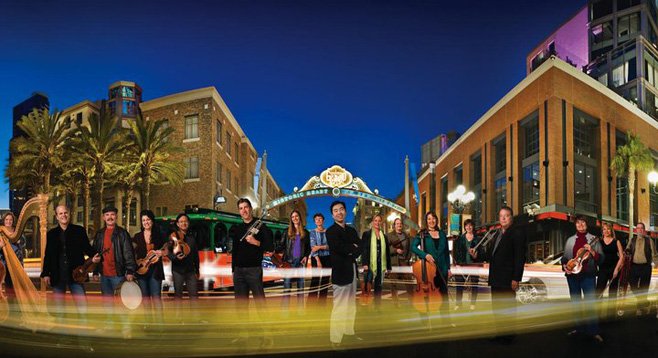 Originally known as the San Diego Chamber Orchestra, Orchestra Nova San Diego was founded in 1984. Jung-Ho Pak was announced the Artistic Director and Conductor for the 2006-2007 season, bringing with him a fresh new vision for the orchestra. Pak has conducted the San Diego Symphony, where he created programs such as the eccentric Lightbulb Series, which sometimes featured a French chef preparing food onstage while the orchestra performed.

“I brought all of my baby-boomer, California-raised, television- and movie- and Internet-
influenced generation to bear on the Lightbulb Series,” he says, “plus my shamefully eclectic taste in world music and pop music and jazz and rock and all these other things I grew up with [he later admits to being a huge fan of Karen Carpenter]. I’m an omnivore. I wasn’t raised in a practice room.”

Pak’s speech is rapid-fire and intense. After a few minutes, it becomes clear that his mission is to eliminate the barrier between performer and audience.

Doesn’t that rob a performance of some of its mystique?

“I think orchestras are trying desperately to remove that mystique. If you look across the country and see all the million-dollar deficits that face all the major orchestras...now everyone's trying to be hip. And I mean that in a pejorative sense. Because what they're trying to do is change the appearance of the product. And what we’re trying to do is change the core of the product, the core of the experience. And that [core] is the musicians themselves.”

Pak is pleased with the results so far. “We are succeeding beyond my expectations, actually, to change the mind of the musician to realize that their job is not to play notes. Their job,” he says, “ultimately, is to grab souls.”

Times are hard for classical music. Budgets are shrinking, interest is waning, and commissions for new scores are thin to nonexistent. “There’s been a lot of sitting on our laurels, so to speak, over the past 30 years. Meanwhile, we’re losing audience because the people come and they say, ‘That's interesting, that’s nice, but you know it’s not a place that I want to come back [to].’ And that’s the true test, really. The proof in the pudding is in how often that person wants to return.”

“The thing that gets me up in the morning is, ‘What can I do to make great art...and what can I do to give it relevance today?’ Am I brave enough to say the answer is nothing? As an industry, can we wake up and look ourselves in the mirror and say ‘This is not working.’ Are we going the way of the harpsichord and the Gregorian chant and the Model T? Is it too much to expect that the way we've been doing things for the past 150 years...is going to always live forever? Or should we expect a natural life span for this art form?”

The Orchestra provides extremely high-quality concerts for a diverse San Diego County with venues around the county. In addition, they present a variety of concerts all around the county and frequently performs for local organizations and corporations for special events. The Orchestra also has an annual holiday tradition of performing Handel’s Messiah in area churches and at the California Center for the Arts, Escondido.

In early 2008, Tyler Richards Hewes, a 2002 graduate of Eastern Connecticut State University's Performing Arts program, was named executive director of the Orchestra. Prior to his appointment, Hewes was the production manager for Mainly Mozart and manager of the Mainly Mozart Orchestra Festival, both in San Diego.

2009 found the Orchestra based in a new venue, Irwin M. Jacobs Qualcomm Hall in Sorrento Valley. Also in 2009, “Guests gave us the highest marks possible in a professionally administered audience survey,” according to Beverly Lambert, “the highest rating possible awarded by the City of San Diego’s Commission for Arts and Culture, a $275,000 grant from the Irvine Foundation, professional musicians (the best!) who support and respect Jung-Ho Pak, our artistic director and conductor, whose revolutionary vision for classical music is bringing people in from all walks of life. We’re one of the few successes among arts organizations in the country today.”

Lambert, formerly the Orchestra’s Director of Marketing Strategy and Communications, was named Chief Executive Officer in April, 2011, after serving as the Interim CEO for the 2010 - 2011 season. Lambert has a Master’s degree in music education, was an IBM marketing executive on the east coast for several years, and subsequently founded and ran an Internet-based software company in the
Bay area before joining Orchestra Nova.

They ended their 2010-2011 season in the black and pre-sold 75 percent of their capacity for the 2011/2012 season. In October 2011, the experimental/innovative ensemble were chosen by Nintendo to perform The Legend of Zelda 25th Anniversary Symphony at Los Angeles' Pantages Theatre. Nintendo held two other performances for the anniversary, one in London and one in Tokyo.

Nova 2.0 includes a complete night of entertainment with their Nova Classics series. Pre-concert activities are built around the theme of the evening and have included dance lessons, a jazz combo performance, art displays, and ambitious food spreads.

On January 14 and 15, 2012, the group supported international guitarist and composer Billy McLaughlin in a performance at KPBS San Diego. The concert was recorded for broadcast on KPBS in April 2012.

The 2012/2013 was announced, despite stalls in negotiations with the local musicians union. The negotiations between Orchestra Nova management and the union remained at a stalemate for several weeks. The union emphasized that they were not at an impasse. An impasse occurs when both parties leave the table and the union was still willing to negotiate.

The primary sticking point was the hiring and firing of musicians. The perception was that Pak wanted absolute control over hiring and firing based on his assessment of a musician's emotional movement on stage.

In October 2012, conductor Jung Ho Pak resigned, with negotiations between Orchestra Nova management and the union having been at a stalemate for several weeks. The sold-out season opening concerts planned as an exploration of the music from the movie Amadeus were cancelled.

Then, in early December, a statement from CEO Beverly Lambert was released that read in part “Orchestra Nova is announcing today that it has decided to cease operations and has filed a Chapter 7 liquidation bankruptcy case. This announcement is the result of the impasse in our negotiations with the Local 325 American Federation of Musicians (AFM) union and the subsequent cancellation of our 2012-2013 season.”

Seeking an alternate POV, the Reader contacted Pat Pfiffner, who has been on the negotiating committee for several years and was at the very first rehearsal 28 years ago when the group started as San Diego Chamber Orchestra. “They couldn’t do business while we had negotiations? They had legal bills because of negotiations? In all the years I have negotiated contracts with them they have never had a lawyer and they have never stopped doing business during negotiations. They did this to themselves, the musicians are merely a scapegoat for total incompetency by management.”