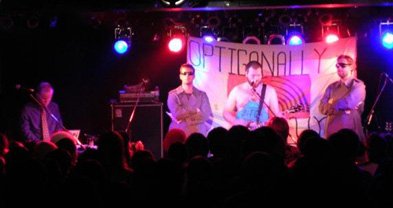 “The Optigan was a kind of home organ made by the Optigan Corporation, a subsidiary of Mattel, in the early '70s,” says Pea Hicks of the obscure instrument around which his band Optiganally Yours revolves. “It was set up like most home organs of the period [with] a small keyboard with buttons on the left for various chords, accompaniments, and rhythms. At the time, all organs produced their sounds electrically or electronically with tubes or transistors. The Optigan was different in that its sounds were read off of LP-sized celluloid discs which contained the graphic waveforms of real instruments…similar to the soundtrack on a film reel.

“Playing back recorded instruments was a pretty unique concept for the early '70s,” says Hicks. “Technically speaking, the Optigan was a primitive sampler. Sort of. I tend to think of it more like a poor-man's Mellotron…They sold mostly through stores like Sears and JC Penny and were relatively inexpensive, about $200 to $400.” Working models now sell for $2,000 and up.

The band's other member is Rob Crow, best known from Pinback, although he usually has a half dozen projects spinning around town at any given time, earning him the nickname "The Busiest Man in Paradise." Several unreleased Optiganally Yours songs are playable at mp3it.com.

Rob Crow's Robcore label announced plans to release new Optiganally Yours records, as well as a new Goblin Cock album, Come with Me if You Want to Live, and a new record by Aspects Of Physics. He also plays in Other Men.

Running Up That Hill, a 28-song Kate Bush tribute album released February 4, 2014 and intended to raise awareness about women's reproductive rights, features Marie Haddad's cover of “Night Scented Stock,” along with Optiganally Yours and their version of “There Goes a Tenner.”

A new album debuted in 2018, Optiganally Yours in Hi-Fi (Joyful Noise Records), which was included in a large box set of Rob Crow projects.