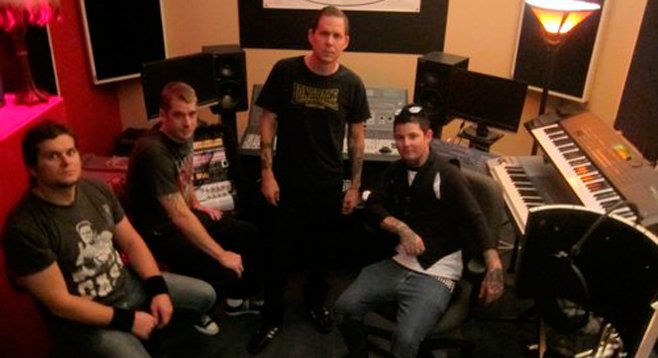 “All of the members of On High have previously been in touring bands,” says guitarist Eric Darman, “and that in itself raises the bar, and so coming into this band we had high standards, not least of which was being tight, which took a lot of practice over the course of several months.”

Along with Darman, a transplant from the East Coast who now resides in Kensington, Chris Skolmowski of Lakeside handles vocals, Mark Bender lives in North Park and plays drums, and James Siedlecki, also an East Coast transplant, is On High’s bassist. The collective list of bands these guys have appeared explains why On High, a relatively new band, sounds this good: Chelloveck 4, Forced Reality, the Worthless, Blackmarket Radio, Battalion of Saints, Star Strangled Bastards, Bottom of the Barrel, and 45 Adapters.

“So here you have two east coast boys and two California natives,” says Darman. “It’s a unique dynamic that definitely adds a certain element which sets us apart from the other bands in the region in terms of musical style, attitude, and quality.”

According to Darman, “Our philosophy on performing is taken from Chuck Dukowski, a founding member of Black Flag: be it two people in the crowd, or 200, those people paid to see a great show, and that’s what a band should always try to deliver. We don’t take anything for granted, either,” he says. “When performing, we have the mindset that it could be our last performance. Consequently, we give it our all.”

Darman describes their sound as “Gritty, in-your-face rock and roll. We really feed off of the energy of the music, which makes for an intense performance. As our band name implies high volume, it also implies high intensity.” He writes much of the music, and Skolmowski is the band’s lyricist. “But in the end,” Darman says, “it’s really a collaborative effort because everyone including Mark and James has added input of equal value. That’s a major part of being in a band,” he says. “Collaboration. If you can do that well, you’re half way there.”

Darman says the ideal On High future would include releasing lots of material, doing lots of tours, winning over lots of fans, and leaving a significant mark. “On High’s ultimate mission is to end what we’ve dubbed as the rock and roll ice age. Although the market is over saturated with bands, there aren’t many bands out there that are playing dirty rock ‘n’ roll. There really seems to be a void. On High was created to fill that void. We believe that there is a crowd out there, albeit a relatively small one, that’s just dying to hear some authentic, ballsy, raunchy rock and roll, delivered with energy and punk attitude.”

On High started in May 2012 and have gigged at the Shakedown in Pt. Loma and the Tower Bar on University Avenue, as well as Characters in Pomona. Darman says it took six months of recruiting to put this lineup together.

“The band came together when a former band that I was in, Forced Reality, recently reunited. A little logistical problem occurred which precluded me from participating in the reunion, for example my living on the other side of the continent. Their reunion, nonetheless, lit a match under my ass. I decided that it was high time to get a band together. As a result, I began writing songs on my guitar, and the hunt was on for the other members.”

He already knew Chris Skolmowski from a Forced Reality-US Bombs tour. “So I looked him up and explained the deal. I had a bunch of songs and I had a drummer, Mark Bender, who I had tracked down on Craigslist.” They needed a frontman, ideally, someone who could pull off Iggy Pop/Stiv Bators style vocals.

“Chris agreed to try out. So him, Mark, and I got together and played a couple of covers and went over some of the material that I’d written.”

Next stop was a bassist. They held auditions but none made the cut until James Siedlecki came along. “He played interesting bass lines effortlessly, and locked in with Mark’s drums. He was also really enthusiastic and knowledgeable about our influences. Not to mention, he was from the east coast, like me. He was the final piece in the puzzle.”