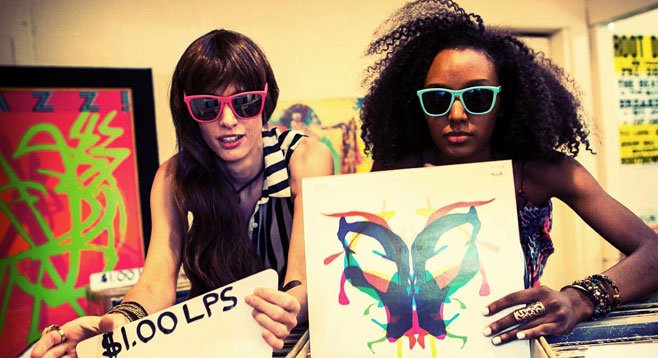 The Okapi is a rare mammal with of traits of both the zebra and the giraffe found exclusively in the Ituri Forest of The Congo. Like the Okapi, the world is a mixture of races and beliefs unified as one on Earth under the sun. This is what fuels the concepts behind the tribal sound of dance-electronic pop duo Okapi Sun.

The band originally featured guitarist Leo (Maren Parusel) and keyboardist Dallas (Gabriela Sanchez), who played in Parusel's self-named band (which won Best Pop Album for Artificial Gardens at the 2011 SDMAs). They describe their music as “a cut-and-paste of our past, our now, our culture, our soul. We decorate ourselves with sounds and let them form into songs.” Both Dallas (vocals, synth, bass, drums) and Leo (vocals, synth, guitar, drums) come from unique backgrounds. Dallas is an army brat and classically trained violinist, while Leo a gifted pianist and multi-medium artist from Germany.

Since playing their first show in January 2013, the band has been staying true its motto, “We bring the tribe to the city.”

A four-song demo was released in May 2013 by Mario Escovedo's Requiemme Mgmt and Music label. That was followed in April 2014 by their full-length Techno Prisoners (Phaedra Records), preceded by the single “Johnny Kiss.” At its core, the record was tracked live at their rehearsal space. They then took those tracks to the artsy Los Angeles community of Silverlake where they recorded with Ethan Allen of Gram Rabbit at Royal Triton Studios, with additional production from Grammy winner Neal H. Pogue (Janelle Monae, Snoop Dog, Outcast, Pink, TLC, Nicki Minaj, M.I.A., Franz Ferdinand) in Atlanta.

After playing SXSW, a support tour hit the Casbah on April 25, 2013, after which they were nominated Best Pop at the San Diego Music Awards. Late in 2014, however, Sanchez left the band, reportedly to live on an organic farm in Napa Valley. Parusel announced via Facebook her intention to keep the band extant.