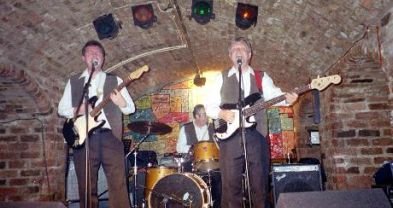 Influences: The Beatles, the Dave Clark Five, the Kinks, the Searchers, the Rolling Stones, Gerry & the Pacemakers, Billy J. Kramer, Chad and Jeremy

The Offbeats play a variety of classic rock and roll, with a focus on the first wave of the British Invasion. The band also performs an all-Beatles show if requested, complete with costumes. Their extensive song list also includes dance music by American artists from 1958 through 1985. Select appearances have included an SRO show at the Cavern Club in Liverpool, England; many Beatlefests (Los Angeles & San Diego), including a 2004 show as backing band for '60s British pop star Billy J. Kramer; and various street fairs (including History Channel Great Race, La Mesa Oktoberfest, El Cajon Magnolia Festival of the Arts, and El Cajon Concert on the Green Series).

Bassist/keyboardist John Hesterman is also a member of the Grapes of Wrath, whose recordings from 1966 to 1973 were re-released on CD in 1999 by Gear Fab Records, based in Orlando, Florida. Hesterman has also released a solo album on 5 Grapes Records, When It Comes to You. He has been featured as bassist and front man with Atlantis, Trace, Stumblin' Buffalo, the Chino Valley Rangers, Deuce Coupe, and the North Coast Jazz Ensemble. He has appeared with the Coasters, Bobby Daye, Jewel Akin, Sons of the Pioneers, Sha Na Na, Rosie & the Originals, the Skyliners, and the Bob Crosby Orchestra. Hesterman owns Eclypsse Records and is a partner in both 5 Grapes Records/5 Grapes Music Publishing Company with Steve Whitehurst (of the Grapes of Wrath) and RHM Music with Ron Ryan, a British songwriter who penned hit songs for the Dave Clark Five.

Guitarist, bassist, and vocalist Doug Harrison is a former member of Zachary Smith, BackTrack, Requiem Bleau, and the Rock Bottom Three. He has also appeared with the San Diego country band Rockin' Horse. In the studio, Doug is a member of Emote, and he recently completed a new CD with Sandi Shaner. Outside of the band business, Harrison and his partner Ryan Dunn own and operate VirtualToad.com, which makes the guitar fuzz boxes Mr. Ed and the Death Rattle.

Founding drummer George Lewis has been a key member of Looking Back, the Occasionals, the Glee Club, and Mo Larry the Cheese. Lewis is a freelance studio musician and is featured on CD releases by singer/songwriter Sandi Shaner.

Andy Tirpak is well known around San Diego. In addition to his work as guitarist and vocalist with the Offbeats, he's also a member of both Laguna and the Kicks Band and is a former member of Polyester Express. Tirpak is a producer, songwriter, and freelance studio musician.

Singer/guitarist Gene Rochambeau is also a founding member of the Noise Boys. He recently completed a new CD with Sandi Shaner.

Singer/guitarist/keyboardist Guy Harris is also a founding member of the Noise Boys.

Singer/guitarist Hal Cope represents the band in the Riverside County area and performs with them on special occasions in and around San Diego.