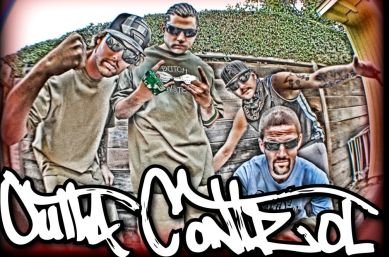 “We play hip-hop with a twist,” says Beaman, who moved with his two high school friends to San Diego from Detroit (by way of South Lake Tahoe CA) in 2004, in hopes of kickstarting their recording and performing career. “We do the unexpected, like starting off a set with a crazy electric guitar solo and setting a sick Beastie Boy-style party vibe. We make music that reflects our life, which is pretty much a never ending struggle AND a big party, all at the same time. We don’t have sick cars or money, so we don’t rap about that.”

Chris Jones says the band doesn’t have a particular style. “We will record anything that we think sounds cool. Hip-hop, rap, jazz, funk, rock, techno — it’s all good.”

He calls Outta Control “a fun, crazy group of West Coast nasty men trying to have some kick-ass times and rock stages all over the place and make enough money to pay the bills.”

The band cites surprising inspirations, such as the Prince formerly known as Fresh, Will Smith. “He’s one of the sickest MCs in the game,” says Beaman. “If you don’t think so, check out his song ‘Freak This.’ We actually live our lives by that saying.”

Another big inspiration is a man whose name they don’t even know. “We were in L.A. trying to get into record label offices to hand out our demo, even though we knew it wasn’t going to work. After getting thrown out of Capitol Records, we talked to the guy who threw us out for a while. He told us that he had thrown out 50 Cent and Kanye when they were still unsigned. After talking for a few minutes, he looked at us and said ‘If you’re good at what you do, don’t quit. It’ll happen for you too.’”