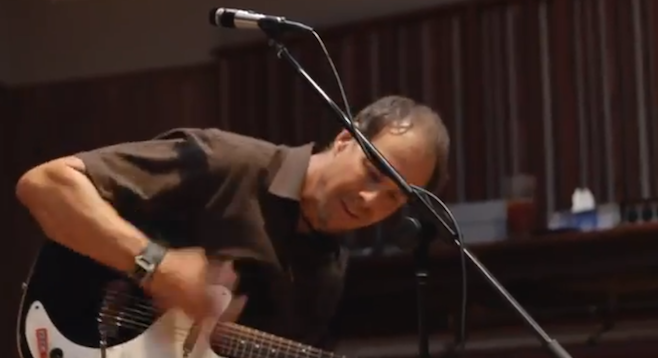 Garage rock revivalists Octagrape has included members of Soul-Junk, Trumans Water, fluf, Drifting, and Olivelawn. Guitarist Glen Galloway (Soul-Junk) sometimes goes by the names Glen Galaxy or Galaxalag. For all his avant-garde leanings (including occasional reunions with no wave rockers Trumans Water), you’d never guess that Galloway creates music for Target, Cadillac, and Adidas commercials via Singing Serpent, a Kensington-based studio that he co-founded with musician Rafter Roberts around the year 2000.

According to Galloway, “Somewhere near the end of 2011, I had six songs that didn’t seem to fit into what we were doing with Soul-Junk. For a while I thought I would play them solo, so I booked some shows and tried it. Then I started finding people who would do one show with me as a two-piece.”

“I was playing an early version of Octagrape with a drummer named Kevin Maliszewski, and he mentioned O, who I’d known way back from the days of Olivelawn, really liked our songs and might want to play bass with us. I figured if we were going to be more than a two-piece, we should be a four-piece. So I asked Kevin if he would be into playing guitar instead, and I asked Ely, who I had played with in Trumans Water, if he wanted to play drums. Over the next four months, we played some shows and recorded nine songs, with my friend Jason Begin producing, with that line-up. Then...Jason Begin started filling in on second guitar, and we asked him to join right after.”

Their Emotional Oil EP was released in February 2013, followed by a full-length that Autumn, Red UFO. They spent the following February on a co-headlining tour of the east coast and southern states with Sebadoh.

Local filmmaker Bill Perrine (It’s Gonna Blow, Children of the Stars) followed the band on tour in 2015, resulting in a documentary film, Why Are We Doing This in Front of People?

According to Galloway, “We had been doing EPs and singles and comps. It became obvious what tracks didn’t belong on the album. There is plenty of stuff on the cutting room floor...Rafter Roberts did a great job making it sound cohesive, even though there’s all these weird things sticking out, it fits together.”

Early 2016 saw the release of a music video for the song “Dirigibles,” and the band also appeared on a San Diego Art Institute music compilation. However, upon the release of Aura Obelisk, Octagrape had no bassist. In November 2016, guitarist Jason Begin became a father and moved to New Mexico, while singer/songwriter Glen Galloway started a new band called Sumatraban.

Begin and Galloway said at the time that they planned on keeping the band "spiritually intact," if geographically separated, though performances would rare. One unannounced appearance took place in early 2017, for a screening of Why Are We Doing This in Front of People? at the Popular Culture Association’s annual convention. “Jason was in town,” Galloway told the Reader, “and [Otis] ‘O’ [Bartholameu], Ely, and Alex [Dausche] got onboard. It turned into an impromptu reunion.”