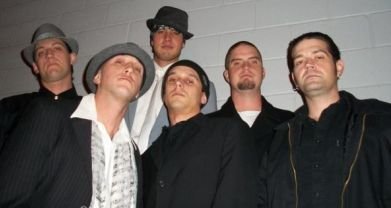 So what do you get when from-the-streets, for-the-streets vendetta rock meets beachy head-bobbers? These bands may seem like opposites, but their ties to one another in the North County scene have been growing.

Beyond their ability to draw crowds is their enthusiasm for Oceanside. It is not uncommon to go to a Wanted Dead show in Escondido or Carlsbad and hear someone yell “O’SIDE!” between songs. Irieside gigs often have band-crowd interaction in the vein of “When I say ‘ocean,’ you say ‘side!’ ”

According to singer Skillet, the “O’side pride” comes from the fact that “Oceanside is one of the last old-school beach communities that isn’t really upscale and clean-cut.… It’s the kind of town you think about when you listen to ska or skate-punk. I also think it’s ’cause we’re like the underdog of all the SD beach communities. When someone says, ‘Oh, you’re from Oceanside,’ they say it with a snobby tone, [but] we’re always quick to represent.”

Wanted Dead front man Skillet teamed up with Irieside’s Ben Blessing, Steven Stotelmyre, and Sid Hilarides to form Sound System because “I’ve always liked that kind of music [ska]…and at this stage in my life, now that I’m a father, I want to play shows that my kids and my parents would be able to enjoyably attend, do something that has a good vibe. I’m always gonna be a punk rocker, so I think that’s gonna come out in any music that I do.”