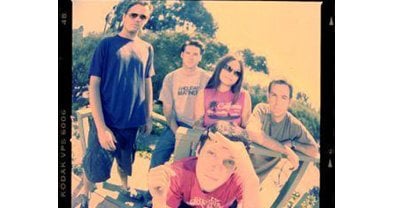 Sound description: Sequencing with layers of guitars, distortion, and reverb.

No Knife combined aspects of math rock, post-hardcore, and other indie rock.

After their first and second full-length albums, Drunk on the Moon (1996) and Hit Man Dreams (1997), Chris Prescott was enlisted to play drums. The group went on to release two more full-lengths: Fire in the City of Automatons (1999) and Riot for Romance (2002). The quartet also made numerous appearances on compilation albums. They toured the U.S. and Canada over a dozen times and did a highly successful tour of Japan. They played their last show in March 2003.

Mitch Wilson went on to play guitar for the Focus Group, as well as with his side project, Moonlife. The Focus Group released its debut EP in 2006 on Stewardess Records. The band, which includes a few former Spanakorzo members, toured the UK that year.

Brian Desjean took a gig playing bass for Get Your Death On!, a prog-core band which formed in late 2005. They played their first gigs on February 19, 2006, at the Ken Club and the next night at the Ché Café.

Chris Prescott joined Pinback on drums for their tour and a 2006 album, as well as playing guitar and singing for the Jade Shader, which formed in 2004.

Ryan Ferguson began touring for his solo project. His website (www.fergusong.com) includes a downloadable clip of No Knife's unreleased video for "The Red Bedroom," filmed two months before the band broke up. Ferguson released his debut solo full-length Only Trying to Help in summer 2007.

In January 2009, No Knife reunited to play during the Casbah's month-long 20th anniversary celebration. A few months later, after a handful of show, it appeared they had split again.

Another reunion performance happened October 20, 2012, in the Mississippi Room at the Lafayette Hotel, where aMiniature also regrouped to play a celebration of nearby Live Wire’s 20th year on El Cajon Boulevard.