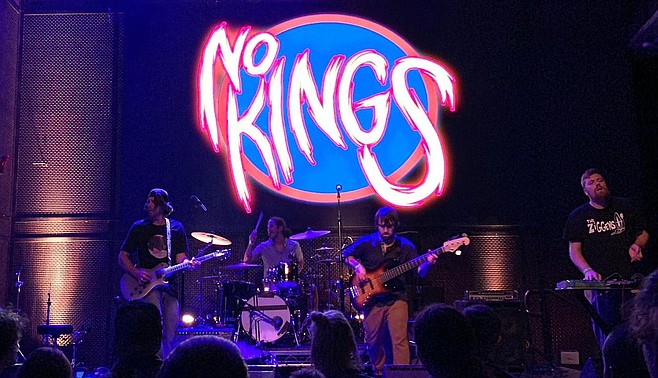 No Kings is a four-piece progressive ska/surf band founded by former members of Subliminal Trip, including Joel Brust, Garrison Cyr, and Colin Holz (though Holz was only with No Kings a short time). "Our drummer, Rafa, is Brazilian, so pretty much the entire OB Brazlian population turns out to the local gigs, its awesome," said co-founder Joel Brust at the time.

The band released their Die Like Dogs album in 2011, followed by the Anytime EP in April 2014. The latter features cover art by Tynell Marcelline. "When trying to find an artist for the cover," says Brust, "we were initally bombarded with submissions that featured the typical rasta, reggae, SoCal stuff, which to us, seems played out and tired and not reflective of our music. So we asked ourselves, what's a common theme in the songs? We realized a common theme in most of our songs is drinking, or something having to do with booze, so when we were pitched the bottle and shot glass for the art, we loved it and chose to use it for the cover."

Their 2015 album Lowlifes and High Rollers was recorded and produced by their drummer's brother, Gab Scatolin, a successful producer and musician in San Paulo, Brazil. "This album has elements of punk, ska, surf, and reggae," says Brust. "Filling out some space on the keys will be Scott Inumberable of local bands 2000 Tons of TNT and Mochilero Allstars."

The album also features Felix Sierra of SM Familia on trumpet. "The horn tracks were recorded at Studio Mochilero with Mike Inumerable, front man for local band 2000 Tons of TNT sitting at the controls."

In late 2016, drummer Rafael Scatolin co-founded Sameland, whose debut album Set In Motion, was also produced in Brazil by Gab Scatolin. By 2019, Brust had been replaced by Dave Bianco, with the lineup filled out by Garrison Cyr, Matt Cook, and Rafa Scatolin.

A new EP, Steady Yourself, was released in February 2019.