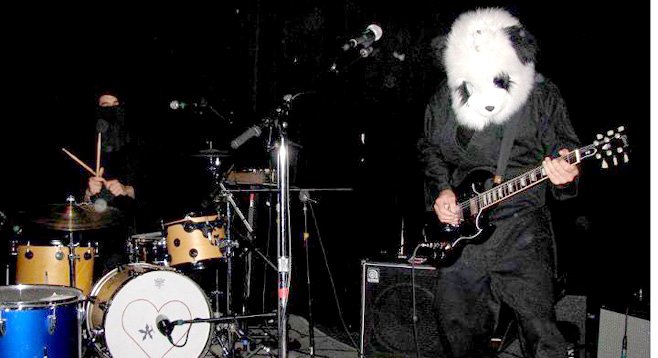 Ninja Love plays 1970s-style hard rock, with a kick of karate. Their debut EP Light Yourself on Fire was released in 2007.

“It’s outrageously hot on stage inside our ninja outfits,” says keyboardist Matt Liebowitz, one half of “karate-rock” duo. “Black pants, black shoes, black T-shirts, black hoodies with the hood up at all times, and black masks. It gets so hot, I keep extra ninja masks in my glove box.”

Neither Liebowitz nor singer/guitarist Mike Villemaire has been trained in martial arts. “All the technique is cribbed from kung fu films and how we believe ninjas act. I mean, who’s ever seen a real ninja, right?”

The band’s stage props do include authentic martial arts gear. “We actually use nunchucks in songs,” says Liebowitz, “and Mike is incredibly adept with them, though not trained. He has a tambourine mounted on the mike stand, and he hits it with the nunchucks.

“Our samurai sword is definitely real, and I assume it’s illegal. It’s certainly sharp. We keep that one in a guitar case until it’s on stage.” Liebowitz admits his hard-rock duo was worried about the sword when playing O’Connell’s so soon after the January 11, 2009 shooting near the club. “We figured tensions were high…if they saw us take a sword out on stage, someone might freak out. Especially if they didn’t like our music.”

The band uses the sword onstage to attack stuffed whales and pandas.

“Our songs for the most part center on battles between ninjas and animals. There’s a loose concept running through all our songs: it’s about a Cyclops who is taking over the world, trying to recruit animals -- mostly marine life -- to form an army. Ninja Love, through ninja skill, as well as the power of our songs (there’s a little bit of Tenacious D in the whole thing) is fighting to save the world, by preventing the animals from banding together with the Cyclops. The animals that have already been recruited and turned evil, we kill.”

“Rabbit Killer” lyrics: And when you find me / I'll be killing / All these rabbits / One by one

Liebowitz hopes actual martial artists aren’t offended by their act. “I guess they might be bothered by us but hopefully not enough to fight us. If real ninjas find out about us, though, we’re screwed. I’m sure we’ll be quickly and expertly disposed of.”

A second Ninja Love EP was released in 2011, Shishkebab, followed by a live EP recorded in July 2012 at the Belly Up.

Then, in late 2012, Liebowitz told the Reader “One of our songs, ‘Gentle Sea Beast,’ is being used in a South American Axe body-spray commercial.” Airing in Argentina, the 30-second ad features an amorous couple incorporating food into an increasingly bizarre makeout binge, including mustard and lobsters(?!), ending with the male retreating to the bathroom to deodorize with some Axe.

“I got a phone call from Amsterdam, totally out of the blue, from a rep at an international licensing company, Massive Talent. He came across our BandCamp page and liked our songs.... It seemed a little unbelievable at the time. They said Axe was looking for a fast-paced rock song, but, honestly, it just seemed too random to be true, you know? We were excited, but it didn’t make sense.”

“This is our first paid licensing deal. I can’t say what it paid, but it was a surprising amount. The thing is, we never contacted anybody about our music, and we have no interest in the business and marketing side of things. We like writing songs and playing shows, but we never put any effort into selling ourselves. We would’ve been happy if they gave us a hundred dollars.”

In late 2012, they announced that they're recording a new album called The Goonch. “It’s about a man-eating catfish that’s developed a taste for human flesh, after feeding on funeral pyres in rivers in India,” says Matt Liebowitz.