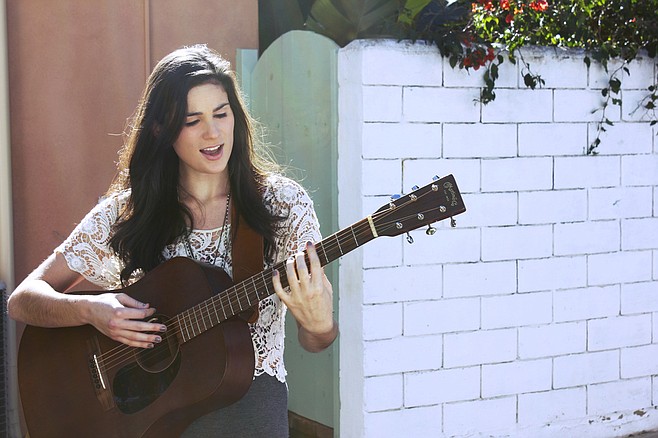 Singer/songwriter Nina Francis graduated from the Bishop School in 2010, going on to study with Randy Newman and Lamont Dozier. She first came to local notice as a protégé of jazz cat Peter Sprague.

In 2014, she graduated from USC’s Popular Music Performance program, where she studied and worked with Lamont Dozier (writer of multiple Motown hits by artists such as the Supremes and Marvin Gaye), David Poe, Melissa Manchester, and Glen Ballard (best known for co-writing and producing Alanis Morissette’s Jagged Little Pill and co-writing Michael Jackson’s hit “Man in the Mirror”).

In April 2017, she opened for pop songstress Tiffany at the Coach House, as well as supporting Eagles of Death Metal at the Del Mar Racetrack Summer Concert Series in August.

Her Between Dreams album was released that October, with its lead single, “Cold Water,” winning the 2017 San Diego Songwriter’s Guild Annual Song Contest. “This record is a great representation of my growth as an artist in early adulthood,” she says “The tracks were selected from a pool of over 50 songs, the oldest, written at the youngest age 18, being ‘He Was Talking to Me,’ and the youngest being a cluster from the fall of 2015. The cream of three-plus years of hard work and craft.”

“I knew the album would feel cohesive, because the songs are autobiographical and from adjacent periods of my life. However, I did not have a title in mind pre-songwriting. I had this feeling that it would be somewhere in the lyrics waiting for me to find it. When recording wrapped, I scanned every single lyric and wrote down every possible title. ‘Between Dreams’ is from my lyric in ‘Curiosity’ – ‘I’m without a map / Hope there’s overlap / Between dreams and reality.’ It ties the album together well, and is ambiguous enough to mean whatever the listener wants it to mean.”

“One interpretation is, as we go through life, sometimes we’re shocked awake by experiences, as if what came before them were but dreams. These experiences cause discomfort and risk, which force us to grow. And lessons we do learn about ourselves and the world.”

“I’ve also always been attracted to the idea of in-between and transitional places and times. The album art photos were taken in the middle of nowhere. The cover was taken at golden hour, the small window of time between daylight and dusk.”

The new songs were warmly received at local events like Songwriters Acoustic Nights in OB. Things haven’t always gone so smoothly. “The worst was when my duo gig with Leonard Patton at Croce’s Park West got cancelled, when Croce’s abruptly and permanently closed the day before. Croce’s was one of the first places I played in town, and I had so many fun shows there. So the worst gig was the gig that never happened.”