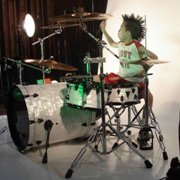 Born in San Diego in 2002, punk rock drummer Nicolas Merritt exhibited his first musical inclinations when he began playing the drums at eighteen months old. Sitting on the lap of the drummer in his dad Chad Merritt’s punk band 16 Hour Drive, Nicolas would keep time on the high hat.

His debut album Punk Rock Elementary was released in February 2010. In June of the following year, he joined Strung Out on stage in Austin, Texas to play the drums on their song “Scarecrow.”