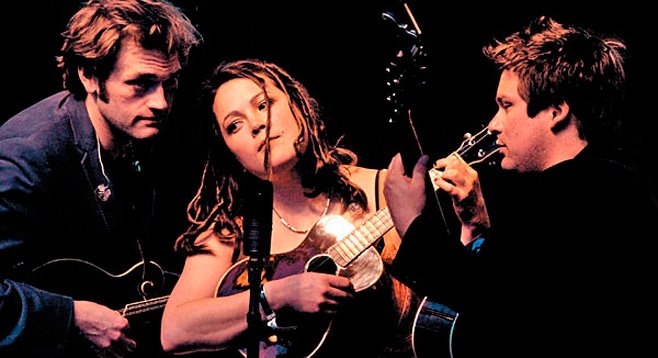 They formed in 1989 with Scott Thile, Chris’s father, playing string bass. The Watkins and the Thile families met after Sean Watkins and Chris Thile had mandolin lessons with the same teacher. The oldest of the children, Sean, was only 12 at the time. Nickel Creek played many renowned bluegrass festivals throughout the ’90s, and by mid-decade, the three members of the band had to be home-schooled to accommodate their busy schedule.

Alison Krauss helped to develop their style. She produced their self-titled 2000 release on Sugar Hill, which is considered their first major release. It is their most successful album to date, selling 900,000 copies and earning two Grammy nominations: “Best Bluegrass Album” and “Best Country Instrumental” for the song “Ode to a Butterfly.”

In 2002, This Side was released, soon certified gold for selling 550,000 copies. Nickel Creek released Why Should the Fire Die? in August 2005, though it was not as successful as previous releases, selling only 250,000 copies. In addition, the single “When in Rome” did not chart on any of the Billboard listings.

Mandolin player Chris Thile is an avowed Star Wars fan. “We were at a bar in San Diego,” Thile told starwars.com, “when low and behold, Carrie Fisher appears accompanied by two of her friends. It turned out that she had been invited by a buddy of mine, to whom I let slip, trying to express the depth of my Star Wars fanaticism, that I could play ‘Princess Leia’s Theme’ on the mandolin.... I found myself kneeling down in front of her playing.

“She had a kind of distant look on her face at first, but after 15 seconds, a smile (of reminiscence, I think) was added. At one point, one of her friends leaned over and asked her what I was playing, to which she responded, ‘It’s my theme!’ I finished and launched into another round of apologetic prostration, but she silenced me by thanking me and — oh, how I’ll cherish this memory for the rest of my life — feeding me a piece of bread. ‘Nobody’s ever done that for me before,’ she said. Ms. Fisher, should you ever read this, I can now die happy.”

In the late summer of 2006 via Billboard magazine and their official website, Nickel Creek announced that at the end of that year they would no longer be recording together as a group for an indefinite period of time. The “Farewell (For Now)” tour started in April 2007 and ended in late 2007. In a recent statement, Nickel Creek said that they “wanted to do this in a positive way and take that last lap before our break. We want to see our fans one more time and play with the musicians that have inspired us over the years.”

The “Farewell (For Now)” tour often included Fiona Apple, who usually performed with the band as her backing group and joined them during their own set. They became close to Apple at “The Watkins Family Hour,” a weekly jam session at L.A.’s club Largo, where Jackson Browne has been known to join the Watkins duo and their friends for a few songs.

Deluxe vinyl editions of three band albums were released by Sugar Hill Records on Record Store Day, April 16 2011. Included are digitally remastered versions of their self-titled debut, the Grammy Award winning This Side, and their final Sugar Hill release Why Should The Fire Die?. A mandolin autographed by the band was given away online as well.