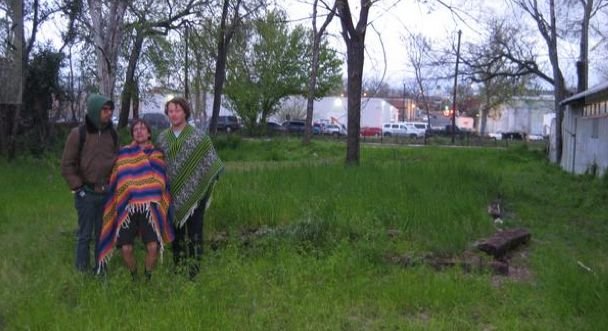 Before summer 2010, New Mexico was known as Apes of Wrath. Favorites of Anti-Monday night at the Casbah and Fridays at the Ken Club, the band fills out San Diego’s alternative-indie scene with much-needed fat rock riffs and girthy bass lines, laid down by Jake Bankhead of Bankhead Press fame.

Bankhead was a junior high science teacher in Georgia before moving to San Diego to pursue his rock and roll dreams. Drummer Dustin Elliott arrived all the way from Austria, homeland of the Governator, by way of Alabama, land of the inbreds. Guitarist Andrew Geldmeier is a reformed Texan, while singer only had to move from Irvine, where he tore up the clubs in a series of short-lived punk bands.

New Mexico kept it edgy, with down-tempo, moody sections to each of their songs, but they also play heavy, approachable, and danceworthy, driving rhythms (not usually favored by indie groups). Rob Kent’s vocals add a hint of garage with a dash of Franz Ferdinand without all the pretentiousness and prog-rocky flailing of Franz.

The group appeared at the March 2008 South by Southwest (SXSW) music convention in Austin, Texas, earning rave-up reviews. Their EP Plastic, Fake, and Frozen garnered a SD Music Award nomination as well as attention from Transfer's Matt Molarius, who purposely and portentiously left some Apes music in the car of Louis XIV guitarist Brian Karscig.

When it came time to record the Apes' debut full-length at Louis' Pineapple Recording Group studio, Karscig was there to lend a hand. In September 2009, the band won Best Alternative at the San Diego Music Awards. Guitarist Andrew Geldmeier left the band in late 2009, to play organ with Little Fowl.

2010 saw the group returning to SXSW. “This last period of change for the Apes has been really emotional and exciting,” said Jake Bankhead on their return to San Diego. “We have embraced a simplified songwriting approach yet kept our energy…The new sound is more concise and has a strong punk energy, but the melodies and dynamics are still there.”

Robert Kent elaborated. “Less is more has been the mantra for a while now,” continues Kent, “but it is definitely not how we started out. It is fun to challenge ourselves to write tricky arrangements and extensive riffage, but we’ve all come to agree that there is something special about bands who can quell the fire of technical ability with tasteful restraint and stick to themes in a song. We are still learning how to do this and find it much more challenging, but progress is being made.”

“All in all, the new sound of Apes of Wrath is not drastically changing again, but we are definitely exploring new territory constantly to keep things fresh.”

That exploration included a name change in summer 2010, to New Mexico. Their EP Have You Met My Friend? was released that November, with the first single being “Case Closed.” By the end of the following year, the group had added keyboardist/singer Peter Graves (Roxy Jones) to their live band.

In summer 2012, the group released several new songs on their BandCamp page, with Peter Graves now a permanent new member. “I’m playing the keyboards because the band recorded a new album that has a much different sound,” Graves told the Reader. “Almost all of it has synth and organ playing a more central role in the sound. They wrote and recorded all those parts on their own, and brought me in to bring it across in the live show.” At the time, Graves was also a talent buyer and production manager for the Soda Bar.

In July 2012, singer/bassist Robert Kent broke his hand and was temporarily replaced for a few shows. Their full-length Malpais, released in April 2013, was preceded by a single for “Alpha Male.” The album deviates from their ornate and melodic Have You Met My Friend? EP and instead invokes a more mechanical, new wave/post-punk aesthetic.

According to the band, the record “is the result of many things -- a bad breakup with a girl, a new recording technique using Otari 16-track one-inch tape, and Robert Kent's newfound fascination with Aldous Huxley's Brave New World -- but it is mostly the result of a band finally coming into its own.”

New Mexico played its final show in November 2016 at the Casbah, with guitarist Jake Bankhead moving with his family to Atlanta, GA. Peter Graves and Rob Kent next cofounded Mt. Pleasant.