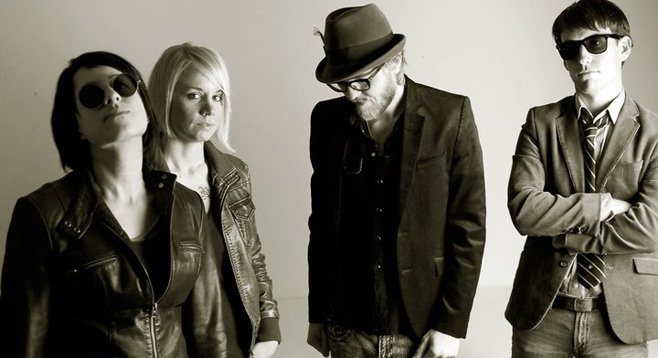 Based in North Park, the New Kinetics was founded by singer Birdy Bardot and guitarist/keyboardist Brian Reilly (Hotel St. George). “Obviously, I listened to Hendrix for 15 years straight,” says Reilly. “If you’re gonna learn how to spell, you gotta know letters.”

Their first drummer auditions were held at Hindsight. “The first drummer, second drummer and third all came and went,” says Reilly. “While winding cables and packing up, the first drummer stuck his head back in the studio door. 'I wanna go again,' he said quietly.”

When Jon Bonser (Death on Mars) sat himself behind the dilapidated set this time, something was different, and the room exploded with the cover originally recorded by The Small Faces. Their next recruit was bassist Leslie Schultze.

After signing to San Diego label Aural Gravy Records, the band released their EP Rock and Roll Has Got To Go in late 2010, followed by a full-length in September 2011, Contact and a video for their first single “Riffle Raff.”

The recorded their sophomore full-length In Stereo in 2012 at San Francisco’s Tiny Telephone Studio with John Vanderslice. Upon hearing the Kinetics’ demo, Vanderslice, who has recorded Deathcab for Cutie, Spoon, and Blur, reached out to the band to produce their album. They recorded everything to tape. “Pound for pound, the studios that run tape take things a little more seriously. It’s like digital photography versus 35-millimeter film,” says Brian Reilly.

The Kinetics broke from their previous record label, saying the company was unwilling to spring for the expense of vinyl, so the band took a DIY approach and utilized the Kickstarter website. Birdy Bardot says, “We knew it was going to be tough to get up there and back, and we really wanted to record with Vanderslice. [On Kickstarter,] we presold the vinyl, merch, stickers, tickets for the album-release party, [drummer Jon Bosner’s] glasses, lyrics, surprise boxes for the high bidders.”

The Kinetics were able to raise $5000, enough to make the record and release it on vinyl. However, the band soon announced that their “farewell show” would happen June 29, 2013, at Tin Can Ale House in Bankers Hill.

Bassist Schultze went on to form Flaggs, featuring guitarist Lindsay Matheson (formerly of the Nervous Wreckords) and drummer M. Franco, making their concert debut on July 13, 2013, at the Casbah. A self-titled debut EP was released in summer 2013.