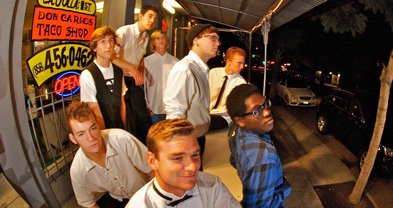 As Halloran sees it, the all-age local band scene is easy to sum up. “The bands that play at Soma are either pop-punk, cookie monster [sreamo], or ska. They pretty much come in one of these three flavors.”

Halloran says the seven-member group is often lumped in with the local ska contingent. “When we started two years ago my dad was the one who told us not to do the typical ska thing. He urged us to look at other styles and try to reach out to a wider audience.”

The young Halloran and his bandmates made sure they did not fall into a ska rut. “We saw how repetitive the other bands could sound,” says guitarist/vocalist Christian Clark, who played sax in La Jolla High’s jazz band. “The trend nowadays is to take old-school ska and just speed it up, which is cool, but that is not the direction we wanted to go...we realized we had to go into the roots of ’60s Jamaica dance halls. We throw in Motown, funk, soul, dub, hip-hop, and abstract swing.”

“There is usually only one ska show a month in San Diego,” says Clark. “So there is like a competition between bands. The way we deal with it is we make our own shows by playing random places in the street. Our first one was at Mission Beach near the roller coaster. We also played in front of Mr. Frostie’s in Pacific Beach and near the Crystal Pier on the boardwalk. When we play Mission Beach, we bring a generator. Otherwise, it’s acoustic. The police are cool as long as there isn’t a crowd blocking the boardwalk. We’ve done dozens of street shows since the summer of 2010.”

Halloran says his dad will not give his band radio love on Loudspeaker, the Sunday-night local music show he hosts on 91X. “He played us once, and he gave full disclosure on the air that his son was in the band. We had already done an interview with [Halloran’s Loudspeaker predecessor] Andrew Rowley. Tim Pyles [94/9] played five of our songs, and we also got played on 102.1.”

But Dad’s connections can come in handy.

“We were practicing at Christian’s house, and my dad came by with Steve Poltz to see how we were doing. We played ‘Screw It’ and we said we don’t have a second verse. After a few minutes, Steve is, like, ‘Here, try these.’ He showed us these lyrics he wrote in, like, five minutes and they fit perfectly. The next week we asked him if he wanted to sing on the song. He said, ‘Absolutely.’”

Poltz ended up playing on their debut full-length Soulidify, recorded at White Horse Recorders with engineer Aaron Swanton and released on Halloween 2011.

As of 2012, the band scheduled its gigs around the hometown visits of Clark, who was attending UC Berkeley, and sax player Patrick Hallahan, then a sophomore at Cal Poly.

In 2017, Clark and Jay Sanchioli (Trunks) were playing together in a three-piece alt-experimental rocker group called Sights & Sages, with drummer Chaz Lamden.

Around the same time, Love Glow was founded by Christian Clark with Neveready bandmates Jay Sanchioli and Declan Halloran, alongside frontwoman Caroline Corn. Their debut EP Honey was released in 2017.

It would be AWESOME if you'd quit passing out stickers as morons are putting rthem on signs etc. Not only disrespectful but illegal and the band can be fined...

almost as disrespectful as the spelling and grammar of your post.