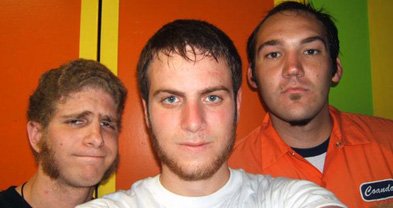 "Netzer is Hebrew for 'branch,'" says Netzer singer/bassist David Kasdan. "While you don't normally associate a branch with hard rock, this word has a special symbolism for us. The biblical prophet Isaiah talks about a branch from Jesse who will rule with righteousness. We believe that this refers to Jesus. Plus, 'Netzer' sounds cool.

"We were one of the first Messianic Jewish rock bands," says Kasdan. "All the members are Jews who believe Jesus is the Messiah, and a lot of our music is about that. We recorded a klezmer song, where I play clarinet, and we also do techno-rock arrangements of traditional Jewish songs like 'Shabbat Shalom' and 'Mayim.'"

Comments about "Mayim" posted by users at Jewlicious.com, include "As Jews by birth, I find it alarming that their parents didn't spring for better music lessons."

"Yeah, we occasionally get a Jewish guy who comes up to us and tries to get us to go to his synagogue and learn more about Judaism," says Kasdan, a full-time student who drives buses at UCSD. "Sometimes they'll test our actual knowledge of Judaism, but we're pretty up on that. Overall, though, people really like the songs we do in Hebrew. These are the songs that most Jews grow up with, so we share a lot of the same culture. And they're easy to adapt to rock because the song structure is the same as punk, with a simple 4/4 beat."

Deus ex Machina is the first studio album recorded by Netzer. Included are songs the band has been playing for years, from the punk/reggae version of "Mayim" to the pop/rock "All Alone" and heavy songs such as "Ripchord" and "Tundra." Their newest album is called Steadfast.