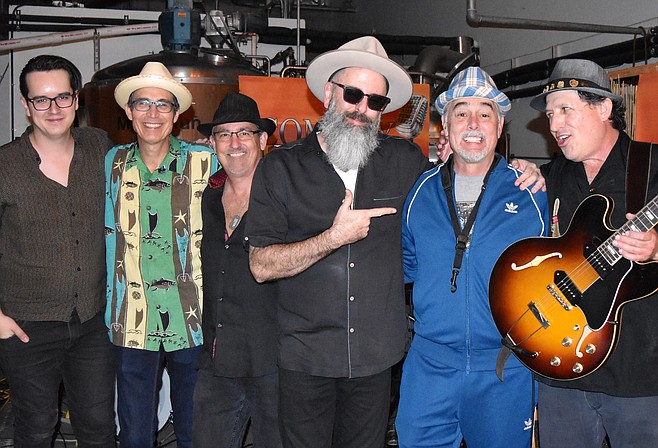 N-E-1 was an early 1980s new wave ska band whose precursor began in 1980 as the Cartunes, with a lineup featuring Rob Glickman (who was 16 when he joined the band), Timothy Cien, Manny Cien, and sax player Eddie Croft. They rehearsed in Spring Valley and performed at locales like Escondido’s Distillery East Nightclub.

They recorded a full-length, So We Go, and appeared on local TV shows like Club 33 and 91X Rocks to Riches Showcase. As the band enjoyed an increasingly high profile, they shared bills with many of the major punk, new wave, and garage bands of the time, including opening for the Clash, Madness, UB40, Oingo Boingo, and Translator. They won a 91X Rocks to Riches competition, becoming one of the radio station's top 100 most requested bands with their single "1-2-3." Another single was recorded at the end of 1980, “Hey You” b/w “Get Serious,” with the label billing the band as N/E-One (now very rare). Other members included at various times Clifford Marcial Jomuad (who left in 1982 and formed his own band two years later, Nein) and Bill Williams.

Their last performance as N-E-1 was in 1987, with their last album being as the somewhat less ska-influenced Moon Dogs. They reunited onstage for the first time at Sounds Like San Diego VI, at the Museum of Making Music on July 11, 2014. Promising “The history of San Diego music in word and song,” the event included Cindy Lee Berryhill, Tolan Shaw, and more. They reunited again in December 2014 at the Casbah, with a lineup featuring the founding foursome of Tim Cien, Manny Cien, Rob Glickman, and Ed Croft, along with Barry Brown on keys and Fred Allee on drums.

Ed Croft and Tim and Manny Cien also played together in Heavy on the 7, formed in 2014 along with Barry Brown and Patrick Armenta. Their debut performance was in January 2015 at the Spacebar in La Mesa, returning many times over the next few years, sometimes with Lance Richardson on drums. Croft also went on to play with Buddy Blue, Rocking Dopsie, Midnight Death Trap Quartet, Blue Largo, the Basin Brothers, Sex Drugs & Jazz, the Avant Guardians, Muggles Meshugana Lounge, Michael Ray & the Cosmic Krewe, and Ritmo Caribeno.

As of 2016, Tim and Manny Cien were performing blues together as the Fire Brothers, and members have also been known to perform as the Reign Makers.

N-E-1 reunited once more in summer 2016 at Lestat's, and again in April 2018 at the Tower Bar, with the latter show featuring founders Croft/Cien/Glickman/Cien backed by Richard "T-Bone" Larson on drums. 2019 found the quartet doing occasional shows backed by drummer Barry Brown (who was in Heavy on the 7 with Croft and the Ciens).