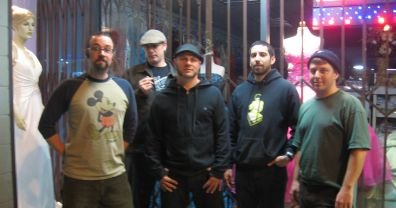 I'm Down Man Away

Berkeley Kent Austin -- aka Beezeley -- formed Nautical Disaster with fellow rock and rollers Damian Delgado and Jaye Furlonger, after the dissolution of their former band, the Daffodils, in July 2006.

“Everything was going great,” says Furlonger, who has a master’s degree in history and works as an architectural historian. “We were playing the Casbah every other month, we’d just recorded a great demo, and we had a live radio broadcast lined up on 94.9 in a month’s time. Then our singer-guitarist decided that he just wasn’t having any fun anymore.”

The initial lineup was Beezeley, Furlonger, and occasional cohort Grimis Apparatus (who traded off on drums, guitar, and vocals). The band's music is bluesy pop, tinged with more than a hint of new wave sheen. “I’ve wanted to be in a rock ‘n’ roll band since I first started listening to Blondie, the Ramones, and the Sex Pistols with my cousins when I was about 9,” says thirty-something singer/bassist Jaye Furlonger. “I started playing the electric bass in the school band, in Grade 6.”

“We hope to inspire a return to that brand of rock that bares its soul, gets drunk, and passes out on your couch,” says Furlonger. “Only to make you delicious coffee in the morning.”

In late 2008, the band recorded a new EP, Interceptor. 2009 saw another EP, ReAnimator, as well as a full-length album at the end of the year, Amantes, Amentes (translated: Lovers, Lunatics). The album coolects three songs from each of the EPS, alongside three new tracks - “Feast of Snakes,” “Serenity,” and “I'm Down.”

In 2009, the group’s drummer was Matt Nelson (bassist for Trophy Wife), and an additional player was brought aboard, Dead Dave, recruited for his love of all things weird and his wicked playing. Female bassist Jaye Furlonger left the band in late November, 2009, just as their second album was released.

After two albums and two EPs, the band announced it was splitting in May, 2010. “There were a lot of extenuating circumstances that led to the death of Nautical Disaster, both private and public,” according to Austin. “We came to a rather abrupt and unexpected fork in the road musically and personally,” says Austin. “She [Furlonger] went high, I went low, and never the twain shall meet. In the end, I was mostly unmotivated to continue to write [new music] for the band and wanted...reinvention.”

Austin went on to co-found psych-rockers Heart Beat Trail. Although the band has the same members as Nautical Disaster, minus Furlonger, any musical similarities are hard to find.

In their search for “reinvention,” Nautical Disaster guitarist Damian Delgado opted to play bass, and bassist Matt Nelson moved over to the drums, joining Jason Lewis as part of the band’s drum duo.

The change in roles resulted in a change in tempos and a different style of music. “Nautical Disaster was a rock-and-roll band with some blues thrown in,” says Austin. “With the Heart Beat Trail, we are expanding those tendencies, slowing things down, and exploring the sonic landscape.”