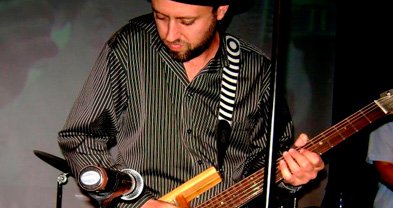 Nathan James started out as guitarist for the Blues Pharohs, then joined Billy Watson's band at age 18. He played in bands with Johnny Dyer and Jamie Wood before leaving his native Fallbrook to join the James Harman band, with whom he started touring at age 19.

"I started playing solo at 22 when I was home from the road with Harman. I started working with Ben Hernandez in about 2001 or 2002. This has been my main gig since then, along with still working with James Harman and Billy Watson. In between and recently, I have worked with Johnny Rover, Big Mo' Band, Nena Anderson, Blue Largo, Robin Henkel, Janiva Magness, Gary Primich, Hollywood Blue Flames, and Rick Holmstrom, among others."

James is a master of the the Piedmont fingerstyle, which involves thumbing of the bass string while picking out a syncopated melody with one’s fingers. James learned by listening to old records by Blind Boy Fuller and Big Bill Broonzy, Blind Blake, and Blind Willie McTell. “For some reason,” he says, “all the blind guys were phenomenal pickers.”

He also plays harmonica, and is a foot percussion player. He uses these tools to transform his music into a truly original and expressive sound that transcends well beyond the traditions of his chosen genre.

For an electric-blues guitarist, he tends to lean toward old school playing. “I think the guitar-based blues-rock styles are dead and not original anymore. The over-the-top, never-ending, loud, electric-guitar-driven blues are boring for young people. I think new blues fans are more likely to be drawn to the raw and stripped-down, even acoustic styles — maybe because it’s the antithesis of the over-saturated electronic music of this era.”

James also fronts an Americana band called the Nathan James Trio, with Troy Sandow (upright and electric bass, harmonica, vocals) and Santa Cruz resident Marty Dodson (drums, vocals). In late 2017, he helped record an album from Kim Wilson of the Fabulous Thunderbirds, Blues and Boogie Volume One, on which he also plays along with locals like Troy Sandow and Marty Dodson.