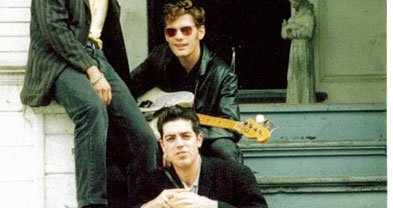 Influences: The Crawdaddys, the Gravedigger Five, Mystery Machine, the Hedgehogs

The Nashville Ramblers, led by Carl Rusk (guitar) with Tom Ward (bass) and Ron Silva (drums), released their song “The Trains” in 1986. The tune is now considered a power-pop classic, and was included in the Children of Nuggets box set from Rhino Records. The trio also spent time as members of other noted combos such as the Crawdaddys, the Gravedigger Five, and Mystery Machine.

Regarding “The Trains,” an article by Ray Brandes at CheUnderground.com quotes Steven Van Zandt, guitarist for the E Street Band and host of “Little Steven’s Underground Garage,” calling the tune “one of the most unspeakably gorgeous instances of romantic yearning disguised as a pop song.”

“In 1986, ‘Trains’ and one other Ramblers song appeared on an obscure U.K.-only compilation, but few people noticed,” says Mike Stax, whose Ugly Things Records released the tune on vinyl in January 2011. “But it’s never had a proper release before. The [Ugly Things] release is an attempt to rectify that.”

Part of the song’s appeal stems from the ’60s-style recording, achieved utilizing a vacuum tube three-track Ampex 300, with an echo chamber driven by a tube mono one-track deck. “Everyone that hears it seems to fall in love with it,” says Stax. “It’s that good.”

“I think there are many people outside of San Diego that know and love [the Ramblers],” says Rusk, who moved to New York City in 1986. “We played a festival in the south of Spain a few years ago, and there were about a thousand people there singing along. It was surprising. And disturbing, actually.”

“The thing about the Ramblers is that it is very much a living thing,” says Rusk. “We never broke up.”

As of 2011, Carl Rusk lives in New York, while Silva is based near SF and Ward recently took up residence again in San Diego. When Mike Stax’s Ugly Things Records released the band’s legendary tune “The Trains” on vinyl, all three original members performed together for a record release party on January 21, at the Til-Two Club.

Later in 2011, they were featured in a three page article in the British magazine Shindig Quarterly (#3). Another magazine, Uncut #174 (November 2011) included the band in their Uncut Playlist at #6, with a photo and text blurb.

The cult power pop band played an April 12, 2014 reunion set at the Casbah. They reunited again at Til Two on May 16, 2015, for a bill that also included the Rosalyns. A January 7, 2017 gig at a private party in Hollywood found former Monkee Micky Dolenz performing with the group.