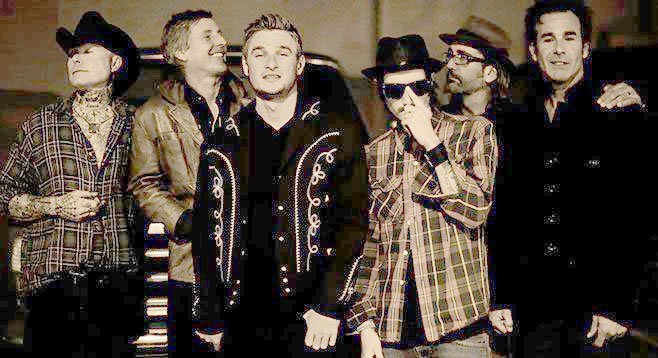 Country rockers Nancarrow is fronted by Graham Nancarrow, whose father, well-known local newscaster/ecologist Loren Nancarrow, died in December 2013. Other players in the group come from bands like Millionaires, White Buffalo, and Lady Dottie & the Diamonds. Russel Hayden hails from a punk band called P.S. Your Cat Is Dead.

Nancarrow started in a punk band he formed while at La Costa Canyon High, Misled Citizen. The band moved with him to the Bay Area when he went away to college. “I got into trouble, so I dropped out and moved back home in 2007.” His next band was the rocking Big.50, before he got into country music.

Although he was raised on a farm in Olivenhein “with chickens, peacocks, pigs, turkeys, cows, and horses,” Nancarrow grew up a punk surfer. “But then I discovered Hank III in San Francisco. I listened to him and all the people who he said he was inspired by. Then I sat down with [Nancarrow bassist] Joe Weisiger who inspired me and convinced me this music could work even though country isn’t really big here.”

The group toured Australia in 2014 and toured Texas that November, before recording their second album for Randm Records in sessions that began in December. Hayden and Nancarrow were also playing together in an acoustic bluegrass duo called Grass.

As of 2018, Graham Nancarrow had relocated to Nashville, TN.