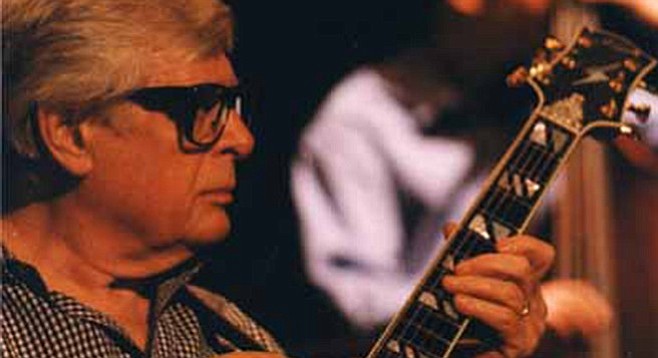 He moved to New Orleans and then was drafted into the Army in 1943. He reported for his work assignment at Fort McPherson, where he remembers “This fat desk sergeant from Arkansas was interviewing me. I informed him that I was a professional working guitarist, and was hoping to be assigned to the military band somewhere. Meanwhile, he’s flipping through some book, and announced that there weren’t any ‘gee-tar jobs’ in the Army. I got sent to the Engineering Corp instead.”

Upon his release in 1945, Lowe headed to New York City, where he worked for NBC for around 13 years and recorded on a number of albums with over two dozen different well-known jazz performers. He also performed music for TV shows like the Today Show, the Wild Wild West, Hawaii Five-O, and others. In addition, he played with Charlie Parker, Billie Holliday, Lester Young, and Benny Goodman.

“I have to be somewhat careful about who I play with, because I have so many specific harmonic references, but I find if I pick the right people, I can just hear what they’re doing and everything flows.”

As for playing with the notoriously volatile bassist/bandleader Charles Mingus, “We were friends,” Lowe recalls. “I never had any problems with Charles. He was a really brilliant guy. He was like other stars I played with, Buddy Rich, or Mel Torme, or Ray Brown. I let them do the leading, and everything flowed from there.”

In September 2008, Lowe won a Lifetime Achievement trophy at the San Diego Music Awards. His technical facility is actually more astonishing than was evident in his ostensible heydays of the 1950s and 1960s.

In fact, Lowe’s playing has achieved a purity and organic sense of flow that many of his contemporaries never attained. Lowe understands the concept of electric-guitar in a way that Barney Kessel and Joe Pass (both excellent players) never fully came to terms with. The guitarist has a very rich, modern tone, which allows him to depart from the endless series of up and down streams of eighth notes common to jazz guitarists of the swing and bebop eras.

Additionally, he has retained many of the finer qualities of that generation's accomplishments, namely, an encyclopedic knowledge of chord inversion and voice-leading, and a superior sense of harmony, lost on many of the post-Wes Montgomery six-stringers. 90 years old in 2012, Lowe was living in Tierrasanta with his wife Betty, a well-regarded jazz vocalist.