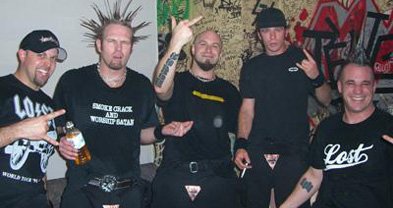 “San Diego is definitely a cool place to be from,” says Mower front man Brian Sheerin. “We get a lot of love from local people who’ve been behind us for years, who go along with all the weird directions we go in. We take that everywhere we go.”

Mower has tried on — and cast off — many musical styles since forming in 1999.

“Look,” says Sheerin, “music is, first and foremost, a live art form, and great live music can be any genre. We play hard rock, whiskey honky-tonk, punk, metal, industrial, blues, jazz, lounge music — whatever will generate the most amount of energy in concert. It makes no sense to cement yourself into one style of music. We give our audience credit that they can appreciate a lot of different styles at different times.”

Not all their fans took kindly to Mower’s 2007 side project, Slower, featuring the same set lists but with slower jazz-based arrangements.

“The underlying thread to the whole band,” according to Sheerin, “is that we have kind of a do-it-yourself punk ethic, and we’re not really concerned about trying to please people…We might do more Slower shows. We don’t ever write anything off completely.”

Mower opened for Metallica at the Sports Arena in 2005, toured Japan with Slayer in 2006, and appeared on MTV’s Headbanger’s Ball in 2007. Their 2007 album Not for You, coproduced by Mikey Doling of Snot, was nominated for a San Diego Music Award. The song "Road Rage" from the album was a top ten most requested track on Sirius Radio's Hard Attack for four months straight, and it aired on MTV's Headbangers Ball.

The band released its third full-length album on Suburban Noize Records, Make It a Double, in 2009 - the following year, it was nominated for a San Diego Music Award. In September 2009, guitarist Greg Russell quit the band on the eve of a national tour with SkinLab, causing Mower to cancel their support dates.

In summer 2010, having won Skinnie Magazine's Battle for the Warped Tour, the band played Tuesday, August 10, at the local Warped stop at the Cricket, performing hard rock songs and Slower songs featuring an extended band including violin, keyboards and percussion."