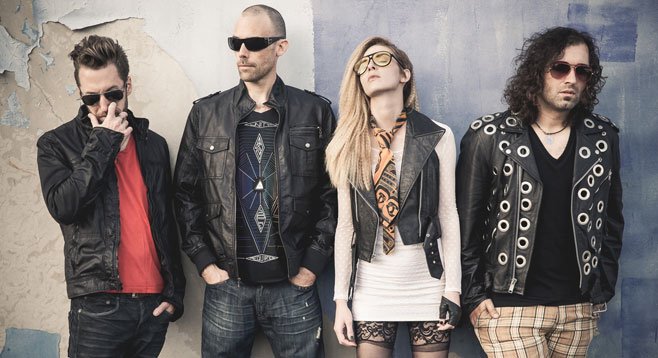 Belanger and Tierra originally met in 2004 and began writing together while in conservatory studying classical piano. They formed a close friendship and later moved across the country together to San Diego, to pursue their love of music-making.

“We began to perform after living together and writing for the better part of two years,” says Belanger. “We did what we called M414 shows at our house, because we call ourselves M4 and our first show had 14 people. We programmed a full light show with lasers, haze machine, spotlights, a backdrop and played about 30 to 40 minutes of music, and hung out with fans after the show with drinks and snacks. The shows spread quickly and we ended up doing close to 30 shows between July and December [2013], sometimes three in a weekend, for about 25 people each show...then we started having to turn away almost as many people as we could admit. We realized we had outgrown the M414 concept and started to play in venues.”

The band recorded demos with T-Bone Burnett in February 2012. “He’s a sonic purist in a way,” says Belanger. "A piano sounds like a piano, a guitar like a guitar, and that kind of influence was present...it was like, 'fuck you, this is how we sound live.' And we do.”

The sound is unusually melodic. “Three of us are classical pianists. We’ve all played here in the States and in Europe, though Chetan [Tierra] is the guy who has taken it the farthest. He was in the most selective piano competitions in the world when he was in school, like Van Cliburn, Soeul, and Queen Elizabeth. Though you’ll catch all of us at one of the pianos during our shows."

Chetan is a Yamaha-endorsed artist, “So they move pianos for us whenever we have a gig, a huge cost savings for us.”

An album called Into the Eyes was released in 2014, produced by Jamie Hill from Secret Agent Audio.