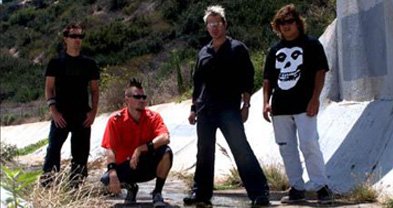 One morning in late March 2007, Morning Riot played for southbound I-5 commuters at the Manchester Viewpoint rest stop east of Cardiff. With their equipment powered by a rented generator, the band put on a show 12 feet away from traffic.

"I was looking right at people's faces," says singer/guitarist Tony All. "They had expressions of shock and surprise, but they were all smiles. It felt way better than playing a regular show."

Before they played, the band hung large signs ("Wake Up and Live," "The Human Spirit Is Alive," and "Look Ahead This One's for You") on overpass bridges north of the rest stop.

"We wanted to send out a positive message to people in the middle of their normal, everyday routine that the human spirit was still alive," says drummer Josh Arend.

After three songs, the band packed up and left.

"Someone e-mailed our MySpace page and said they saw on the Sigalert Web page that there was a visual and audio hazard and that CHP was en route," says Arend. "We didn't know what would happen. That's why we used our old equipment in case anything got confiscated."

CHP public affairs officer Tom Kerns confirms that a traffic alert had been issued and that officers were en route.

"That [rest stop] area is not meant for that activity," says Kerns. "It's meant for people to stop and take a photo or rest for a few minutes. They would have been required to get a permit to do that."

Kerns says the band's equipment would have been confiscated only if they had stayed after being told to disperse.