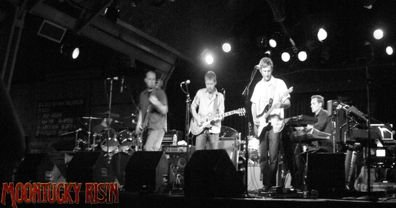 With a band name like Moontucky Risin, you might expect to hear Southern-fried or Cajun-cooked rock, perhaps with a side of bluegrass or a pinch of rockabilly. And that’s what listeners got, back when cofounders Jason Wiley (guitar/vocals) and Aaron Luke (drums) were still based in Lafayette, Indiana.

“We were called elliotness then,” says Wiley, “named after the federal agent who went after all the moonshine bootleggers. We played kind of swampy, barroom, foot-stomping music, and we wore stuff like overalls onstage. But then, as we evolved into more of a jam band, we’d do things like wear psychedelic hippie shirts under the [overall] bibs.”

After the name change and a move to California, Wiley says, the group’s sound became “organic groove rock. With jam bands, there’s so much going on musically that there’s never an opportunity to get bored. Nothing’s ever the same twice, from classic rock riffs to intricate psychedelic jams, from bluegrass to fusion, to songs that run 45 minutes or an hour. Whatever the situation and the day and the mood calls for.”