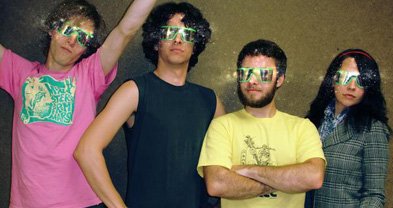 The band is associated with the DIY ethic, self-releasing homemade albums, home recording all their music, creating and working on some of their own gear, and playing venues that cater to independent music.

When Monsters from Mars play their cover of Britney Spears’s “Toxic,” that spacey-sounding instrument is a theremin, an electronic musical device popularized in the 1951 sci-fi film The Day the Earth Stood Still.

“It sure is a head turner,” says theremin operator (and band bassist) Scott Jones. “Ours is homemade, like a lot of our equipment. We try not to overuse it by just making flying-saucer noise with it. We run it through a delay pedal to give a thick psychedelic sound for certain parts, and we actually play melodies with it in songs like the Britney cover.”

The band’s version of “Toxic” is included on their 7 inch vinyl record Surfing through a Creepy Castle.

“It gets requested every gig, and not everyone realizes it’s a Britney song,” says Jones. “We joke that she’s probably getting two-cent royalty checks and saying what the hell. Someday, we’d love to be her backing band and play it, which by the looks of her career could become a reality.”