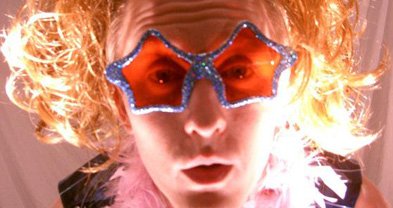 “I bring exploding foam, snow machines, confetti cannons, pinatas, and remote-control space ships,” says Mono Mono’s one-man bandmember Jeffrey Beringer of his “interactive, inflatable stage show.” Interactive? “The lights and other special effects are operated by radio control, and I give control boxes to the audience,” he says. “I dress in drag and sit on your lap...[audiences] blow my clothes off with my leaf blower, and I run naked through the venue.”

Okay. Inflatable? “I put on an inflatable Sumo costume and blow up like a huge, obese marshmallow man, and [audiences] squeeze, hug, grind, hump, and bounce me,” he says. “I have an arsenal of inflatable monkeys, sex dolls, and blow-up toys…Sometimes [audiences] jump on my toys and destroy them. I place balloons into the crowd, they hold them on their lap, and we jump on each other, exploding the balloons.”

Musically, he says “I have help from my iPod and my computer…The vocals are live, and the music and sound effects have been electronically programmed. I use Reason and Ableton Live loop-sequencer programs.”

His prop-heavy show can cause problems. “I had a major fight with the stage manager and engineers at the House of Blues,” he says. “Before I walked onstage, they said [HOB] was ‘not for clowns’ and that they didn’t have sufficient staff to clean up streamers or confetti…I had to do an extremely limited show. At the end, a huge box of streamers somehow accidentally slipped into the crowd and they went wild, making a huge mess. Ooops!”

According to Beringer, “Over 20 of my inflatable monkeys have been kidnapped at shows…Now they appear in photos all over MySpace.”