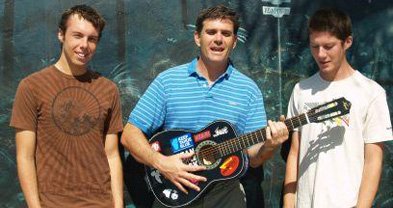 Sound description: A classical, meditative wall of sound, or music to contemplate your naval to.

Current Status: Monk Party plays at the Jyoti-Bihanga restaurant, at street festivals like Art around Adams, and at local holistic-related businesses like the Pilgrimage of the Heart Yoga Studio in Normal Heights. Says Sujantra, "We don't usually attract guys who shout 'Play Free Bird!' "

"All three of us really are monks, though we don't perform with shaved heads and robes," says Monk Party keyboardist Sujantra. "I spend about two months a year studying with our spiritual meditation teacher, Sri Chinmoy, usually in New York, as does Marichi [guitarist] and Shapathanal [drummer]."

Says Sujantra, "When Sri Chinmoy goes into a meditative state, sometimes he writes simple melodies, which we then create a song around.... We call the music a 'meditative wall of sound.' It comes from the same place of calmness we achieve in meditation. A lot [of songs] are instrumental, but some have lyrics.... In 'Like the Supreme Lord Shiva,' we sing about the Hindu god of transformation."

Sujantra is one of the founding operators of the Normal Heights vegetarian restaurant Jyoti-Bihanga, which is a virtual shrine to Sri Chinmoy that's been run by his student followers for nearly 20 years.

"We aspire to create a small corner of the world that is inundated with the spirituality and philosophy of our meditation teacher," says Sujantra.