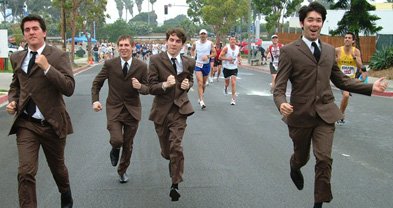 The Modlins are an oldies-influenced indie-pop band. Eric Killian (right-handed guitar) and Matt Sheridan (left-handed guitar) met in 2003, releasing The Daniel EP early the next year under the name "the.beat.less." Their temp drummer at the time was Daniel, of the Los Angeles band Spanish Archer. Thanks to a Craigslist ad, they found a permanent drummer in autumn 2004, Stoph Rhanor.

After changing their name from the.beat.less to the Modlins, they released The Andrew EP in spring 2005. It was around that same time that Alex Smith (bass guitar) joined the group, completing the band's rhythm section and adding a third harmony to their oldies-style vocal arrangements.

Commencing a series of shows with their first appearance as a foursome in May 2005, the group maintained their busy recording schedule, releasing their third effort, The Michael EP, in October 2005.

The next year, the Modlins made an appearance at mile 15.4 of the Rock and Roll Marathon, and performed a three-hour show at Oceanside's Rusty Spur. Their first full-length album  Here's to Being Happy, was celebrated with a CD release party at the Whistle Stop on February 16th, 2007.

Here's to Being Happy was nominated for "Best Pop Album" at the 2007 San Diego Music Awards. The band's release, With Friends Like These, took that award home in 2008.

However, after five years, six tours, and over 150 shows, the Modlins’ final performance was at the Whistle Stop on August 20, 2010.

The end of the group came when guitarist Eric Killian announced he was relocating to the East Coast. Bassist Alex Smith’s pending wedding and drummer Stoph Rhanor’s non-Modlins activities with other groups also pointed to changes within the band.

Even as the split was looming, the Modlins are issuing two more albums to coincide with their breakup, Shoot the Moon and Late Night Feel. Despite releasing 28 songs at once on the discs, Killian notes there is still enough material left for at least two further albums, including soundtrack material written for a friend’s stage adaptation of Alice in Wonderland.

“Our ‘superhero power’ is writing too many songs,” laughs Killian, who penned the bulk of the band’s tunes with guitarist Matt Sheridan. “We wrote all the Alice songs before we found out Tim Burton was remaking it,” he said. “We also have another 10 to 15 songs hanging around that are a bit older. They just never made it to any record. I’d happily let them go the way of the dodo, but Matt’s a strong proponent of trying to release it all.” There is also a cover of the Pixies’ “Gouge Away” in the vault.

While the farewell is set in stone, Sheridan still holds out hope that there may be more from the Modlins, despite the odds against it. “Believe it or not, I still feel like we have more to say,” he commented. “So I hope that after we’ve had a nice break, we can adapt our circumstances, or adapt to our circumstances to make that happen.”

Killian is more pragmatic about the future. “You’ll always ask yourself, Is there more we could’ve done? Should we have recorded that differently? What if we wrote just one more song?” said Killian. “But at this point, we’ve got over 80 songs recorded. I think being able to look back at our discography as it stands now, it’s a testament to all the hard work we’ve put in over the years.”

In late 2010, guitarist Matt Sheridan also moved from San Diego. “My plan is to live with family in Sacramento for a few months, save some money, and then try to make it to New York City at year’s end.”