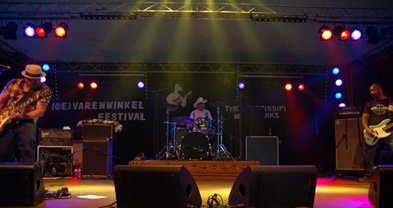 Sound description: "Grease punk," aka punky, rootsy blues rock to surf by. The band calls itself "Screamin’ Jay Hawkins meets the Cramps, [drawing] as much from Lightnin’ Hopkins and John Lee Hooker as it does from the Clash and Social Distortion."

Playing in bands since the age of 16, Scottie “Mad Dog” Blinn cut his teeth with legendary San Diego bluesman Tomcat Courtney in the late 1980s. By 1992, Blinn hooked up with drummer Tom Essa, who was drumming for the rock band Natasha’s Ghost. With bassist Mike “Sandalwood Haze” Jones joining up, they formed the Mississippi Mudsharks, a hard rockin’ blues band.

“When I was 23 or 24 and we were doing our first CD,” he recalls for the Reader, “we went to Hollywood to master it. We had lunch at Roscoe’s Fried Chicken and Waffles and met Ice Cube, Ice-T, and Tiny Zuess Lister.”

By 1994, the Mudsharks put out their first CD, Workin’ for Nickels and Dimes, and opening for every major blues headliner coming through town. The band was touring the southwest and California regularly, the European market was taking notice, and they were opening shows for the likes of Buddy Guy, George Clinton and P-Funk, Dick Dale, and Willie Nelson. Even Brian Setzer and Clarence “Gatemouth” Brown would drop by to sit in! But the highlight was getting to hang with ZZ Top several times, including a night where Blinn and Billy Gibbons pulled an all-nighter in Dallas, Texas, talking cars, guitars, and blues, and playing guitar.

By 1996, the Mississippi Mudsharks were on their way to Europe, where their first CD hit number one on the CrossCut Records Blues Charts. Following up the tour, they returned home to record their second CD, Traditional Heavy, which also hit number one on the same charts, and by 1997 the band received the honor of receiving their third straight (1995-1997) San Diego Music Award for “Best Blues.”

By 1999, everyone was tired, and musical differences broke up the band. They put out one more CD, the live Whatcha Hear Is Whatcha Get, and toured Europe one more time. Blinn also formed the Tiki Torchers with former Hooters drummer Dave Uosikkinnen and Tim Butler (Hot Rod Lincoln) on bass. They put out the CD Hoodoo Charm. Blinn’s efforts earned him San Diego Music Award nominations for "Best Blues" with the Mudsharks, "Best Blues CD" with the Tiki Torchers, and "Artist of the Year" the same year. Hoodoo Charm went to number four on the CrossCut Blues Chart, following Stevie Ray Vaughan & Albert King, Rory Gallager, and Luther Allison.

After a 2001 European tour with the Tiki Torchers, Blinn hooked up with old friend and former harmonica player for Social Distortion, Eric “Jailhouse” Von Herzen, and formed Mississippi Mud. This proved to be a great turning point in the musical direction of the band. After three European tours and two CDs -- the 2002 Mississippi Mud, nominated for "Best Blues Album" at the SDMAs, and the 2004 EP, The Hangin’ Tree, Blinn and Von Herzen had planted the seed for a new sound they coined “grease punk.”

After a serious illness sidelined Jailhouse in 2005, Blinn regrouped with original Mudshark drummer Tom Essa and bassist Mike Lars. The Mississippi Mudsharks were back! 2006 brought a new CD of originals, Train Rolls On, which rose to number four on the CrossCut Blues Charts, was nominated for “Best Blues Album” at the San Diego Music Awards, and has received great reviews for it’s hard-edged roots/punk sound. The band immediately went on a festival and club tour in Europe for two months to support the CD.

In summer 2012, former Mudsharks bassist Greg Willis suffered a stroke, according to Blinn. “He is able to speak fine but has no use of his left hand, making it impossible to play bass...several benefits are in the works.”