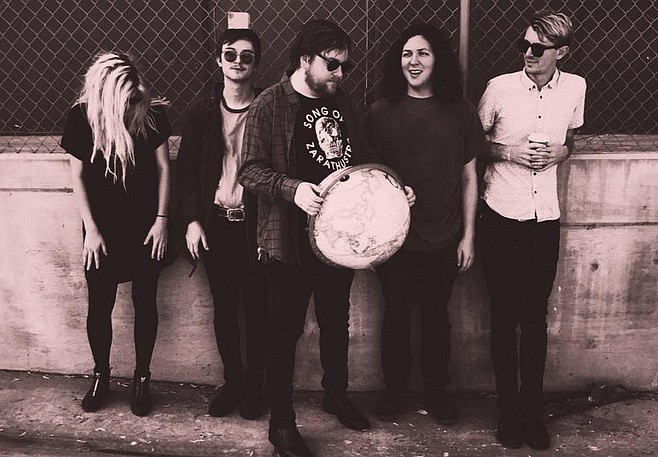 With a name inspired by the title of the Bubba Sparxxx single “Ms. New Booty,” Miss New Buddha was formed in 2017 by Warren with Jordan Krimston (Pandemonium, Lua, Big Bad Buffalo), who had performed together when Krimston filled in on drums at a Future Crooks gig. The two recorded a handful of songs that leaned heavily into the punk spectrum.

“We did four songs together and were just gonna put out an EP,” Warren told the Reader in early 2018. “Then we took a huge chunk of time off. Not even a year ago, we started putting together this incarnation. We used those same songs and wrote a bunch more and kind of got everybody together. Rounded-up a bunch of young-uns.”

The band was eventually joined by Shane Moylan (Weatherbox, Meraki), Sarah Linton (Lua), and Trevor Levieux (Daysleeper), with Warren mostly giving up the guitar to sing and write songs. They made their live debut in November 2017, around the same time as they dropped their first single, “Creeper in the Wings.” They recorded a debut full-length at their drummer Trevor LeVieux’s home studio.

Their album The Situation Is Excellent, mixed by Ben Moore, was finished in Autumn 2019.