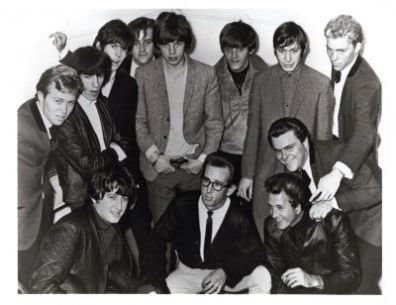 11-1-64: the Rolling Stones played an evening show at Balboa Park Bowl, after appearing that afternoon at Long Beach’s Civic Auditorium. Tickets cost $3.50, with the show starting at 5:00 p.m. Various acts opened, including local garage band the Misfits, featuring future Moby Grape singer/bassist Bob Mosley. “We played a lot of places around town,” he recalled in a 2005 interview, “but [the Stones show] was the biggest thing we’d done.”

At the time, the Misfits were signed to Imperial Records, whose roster included Ricky Nelson and Fats Domino. Their single “This Little Piggy” (actually a reworked version of “I'm a Hog For You Baby” by the Coasters) released just before the Stones show, was appearing in Top 30 surveys for radio station KDEO -- which hosted the Stones concert -- as well as at KCBQ and KGB.

The day after the San Diego show, the Rolling Stones recorded at RCA Studios in Hollywood for the first time. They taped the songs "Pain in My Heart," "Everybody Needs Somebody to Love," "Hitch Hike," "Heart of Stone," and "Down Home Girl."

In December 1964, after a gig at the Red Coat Inn (5933 University), the band travelled up near San Francisco to record some studio demos with Sylvester Stewart (Sly Stone), but little came of the sessions. The band split in 1965 after guitarist Earl Steely married and refused to tour. Bob Mosley stayed in San Francisco and joined Moby Grape.

However, Mosley hit on hard times after Moby Grape dissolved amidst years of lawsuits. “I was living in the bushes alongside a San Diego freeway in 1996,” he recalled in 2005, “when a friend picked me up and told me Judge Garcia in San Francisco had agreed to give the Moby Grape name back to the band, instead of the corporate suits.” The partially reformed Grape occasionally performs and records today. The Misfits have not reunited.