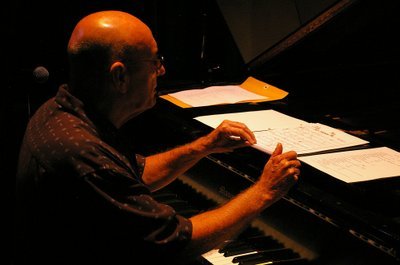 Pianist Mike Wofford was born in Texas, but grew up in here in San Diego. He began playing around age seven and was drawn to jazz by the time he hit sixteen.

After high school, he moved to Los Angeles and began playing and sitting in with west coast musicians like Zoot Simms, Shorty Rogers, Chet Baker, and, in 1967, Drummer Shelly Manne. He also became a successful studio musician at that time, playing numerous commercial, film and pop dates. He was Oliver Nelson's first call pianist at Universal Pictures.

In the 1970s, Wofford joined vocalist Sarah Vaughan's group as pianist and musical director. He would fill a similar role with Ella Fitzgerald in the late 1980s. His long history in both jazz and rock includes winter 1973 sessions with John Lennon and Phil Spector, for Lennon's Rock and Roll album of covers.

As of 2011, Wofford mostly works as a bandleader, notably in a quartet with his wife, flute virtuoso Holly Hoffman.

Although he is most well known as a mainstream jazz musician, Wofford has an active interest in free jazz as well, as his work with multi-instrumentalist Vinny Golia and bassist Lisle Ellis demonstrates. He has appeared on over two hundred albums as a sideman, and dozens as a leader.