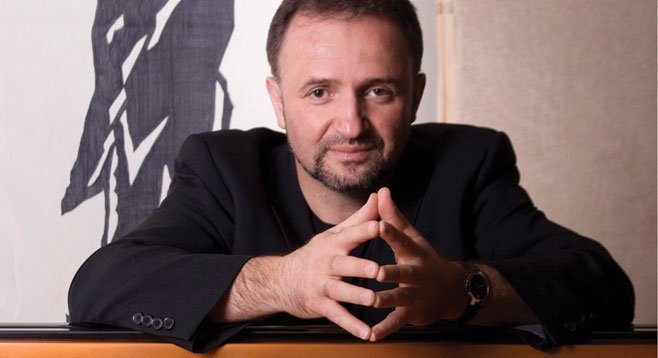 Mikan Zlatkovich is a modern jazz pianist. “And I occasionally do acoustic R&B,” he says, “whatever that is.” His credits include gigs with Tony Scott, Clifford Jordan, Chet Baker, Ernie Wilkins, Anthony Wilson, Willie Jones III, and Charles McPherson. He counts at least ten records as a sideman and has released several of his own recordings as band leader.

Zlatkovich was born in Kosovo. “I started playing piano when I was seven,” he says. “I tried guitar, but I couldn’t take that.”

“I’m trained by ear and self-taught. I have no ‘jazz school’ training. I transcribed what I heard on the radio. Tapes and records cost too much. All I did was listen, repeat, listen, repeat...you know what a drummer once told me? That I’m a drummer’s pianist. Meaning that I’m percussive. The piano has to keep the time as well.”

At the age of 20, he moved to Belgrade. Eight years later, he moved to New York, before settling in San Diego. He lives in University City, “on the La Jolla borderline, by the fabulous Mormon Temple.”

He cites Ahmad Jamal as a major inspiration. “He has no boundaries. He’s reinvented his sound. At one point he was playing only standards. Why? You have to stay in the boundaries. If you step out, they’ll say, That’s not jazz. I say, So what? I’m playing the same thing over and over, and I’m boring myself to death.”

“Is there a note that hasn’t been played? I don’t think so. Jamal reworked the whole thing, suddenly, and now I play whatever I feel. What’s that playing now? Coldplay? Michael Jackson? I don’t care if it’s not traditional jazz — if it’s a nice song, I’ll be able to do something with it.”

49 years old in early 2012, Zlatkovich said “At this point in my life, I play what I hear, whether that’s a traditional jazz song or a modern song. It can be any song that I hear. As an artist, I will make it my own. I am what I am. Like Ahmad. He has no category.”