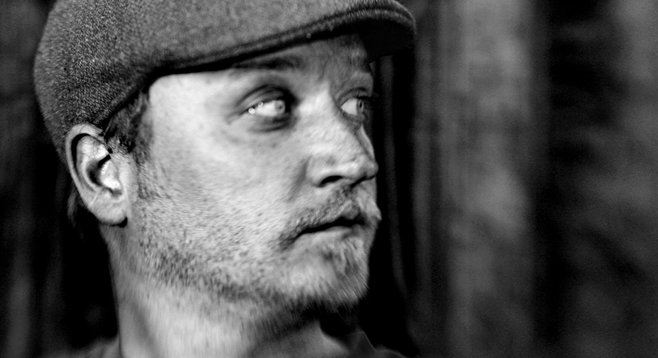 “I’m an East Coaster,” says Pennsylvania native Michael McGraw. “I have a little moodiness and I’ve come to embrace it. The music we’re making now is true to that.”

McGraw moved to San Diego in the summer of 1999 to pursue a music career. Taking bits and pieces from melodic British rock, 1990s American angst, and the heartfelt honesty of songwriters past and present, McGraw has adapted a simple style to convey his ideas.

In 2009, the trio released a 6-song EP, Hillside, that blends folk rock with modern sonic touches. That was followed in May 2011 by a 5-song EP, You Don’t Know Nothin’ and That’s What Makes it Alright, mastered by Mike Kamoo at Earthling Studios. The cover depicts McGraw’s dog, the inspiration for the album’s title.

“I have a very Brit rock background, so everything has a lot of fuzzy guitar,” says the North Park-based musician, who is also a freelance illustrator who makes show posters for his own group and for touring bands.

“I tend to find a universal theme for each song. Nothing too blatant. I take a very Rolling Stones approach to songwriting, which is phonetic rather than going in with a preconceived theme. People have always told me my songs are very anthemic, like U2, which isn’t intentional. I try to write very straight songs. I don’t try to reinvent the wheel. If I take the songs we play now and make them acoustic, it sounds Americana.”

“My 20s were all about questioning what it all means,” McGraw says. “Now in my 30s, I realize I don’t have to have all the answers.” He got married in Autumn 2011 and began work the following year on a record with his band the Butchers (formed in 2008), as well as turning up around town frequently at supportive venues like the Soda Bar.

"The worst gigs are any bar gig where the establishment thinks, because they are promising your whole band more than $50, they can treat you however they see fit. I'm a grown ass man and we do what we do. If you like it, please book us. If not, there are plenty of bands out there that can get people to boogie down until the break of dawn. That's why I become loyal to places like the Soda Bar. Places that respect you as a musician and try to set your band up to succeed. That's all you can ask for as a local band."

A full-length called So Few Places to Run and Hide was released in May, 2015. ""The title comes from a line in a song on the album of the same name. It stems from an observation that slowly turned into a philosophy I have about living on the west coast, having moved from the east coast where people and the lifestyle is much different."

"The gist of it is, with so many great things to see and do when you live in such an exciting, vibrate city like San Diego, it can feel very isolating if you find yourself going through a struggle or hardship. Almost like you need to hunker down and wait out the storm, only to resurface when you feel you're in a happy enough state of mind and worthy to participate in the awesomeness. If that makes sense."