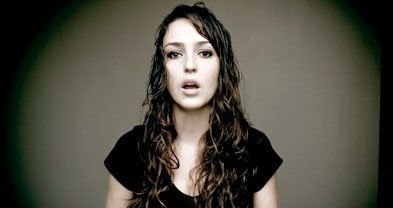 With a voice reminiscent of Norah Jones, by way of Tori Amos, Melissa Vaughan writes hopeful, heartfelt piano ballads. “My songs have a lot of genres all crumpled together,” she says. “I have some jazz, some folk, some circus sounds, and a lot of songs kind of float between styles. It’s mostly just mellow music, and the lyrics are usually a bit tongue-in-cheek.”

Born and raised in Texas and Oklahoma, Vaughan says she was about seven when she composed her first song. “It was in my great-aunt’s basement, in Tishomingo, Oklahoma…my family taught me to appreciate the important things in life: music, reading, expressing yourself creatively, and basements, which are where most important things begin.”

After moving to San Diego with little more than a guitar to her name, she says, “I took a break from doing anything musical for about two years, except for having the occasional hoedown in my living room.” She bought her first piano at a local yard sale in 2005 and began writing songs centered around that instrument. Now, she’s regularly found performing solo sets around town, especially at coffeehouses and open-mike nights.

“I’m just thoroughly content [to be a musician],” she says. “This is my dream. It’s beautiful and real and, you know what? It’s going to be hard work. But even hard work can be fun, if you’re doing something that you were born to do.”