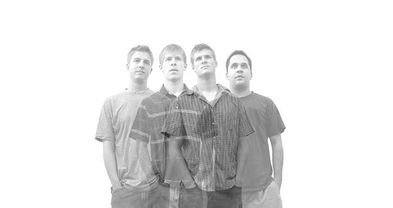 Mike Stoltz, Eric G, Leo Zugner, and Dave Swendsen first met at the Catalina Lounge in Ocean Beach in January 2005. One week later, they were playing their first show. Meld is an amalgamated mix of the many styles each member brings to the group. From blues to reggae, pop to funk, rock to jazz, Meld likes to keep you guessing what they'll play next.

Meld's motto is "Prepare to have your ass blown out!" While they fall a little short of delivery on the promise, I love the sentiment. And the band isn't bad. They're not setting the music world on fire; they're a beach jam band. Which means they're a collection of guys who aren't masters at arrangement or lyrics, but they've played music since before they could drive.

In October 2006, they recorded their first LP, This and That, combining their first five-song EP with five new songs. In January 2007, drummer Leo left the group to go back to school and further his education. In March 2007, Meld found a new drummer with Eric G.

In 2008, departed drummer Leo Zugner joined the solo band started by John Miller, of Johnny Different, where he was joined by bassist Dave Swendsen.