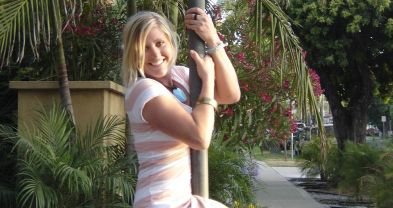 Singer-songwriter Megan Combs was 23 when she left Virginia on New Year’s Eve 2007/2008. “I didn’t have enough money for gas to get to my parents’ house in Pennsylvania,” she blogs about leaving her home, job, and husband behind. “I didn’t have even one cent actually. I was bawling my eyes out, while my best friend, who was in Pennsylvania, was on the phone with the gas station attendant trying to get him to let her pay for gas over the phone with a credit card.”

She says she wasn’t able to pursue her music career in Virginia. “You know that little voice in the back of your head that tells you that something is right or wrong, ever so slight. Some people call this a conscience. I think of this as a personal GPS…I had been ignoring it for a while. Way too long, in fact. Neglecting it like a cactus that finally dies of thirst. I was that cactus. I was dying. Every day, I would drive to work, and drive home, and the only thought that consumed my mind was ‘What if?’”

Combs landed in Ocean Beach San Diego in summer 2008, she says, “to broaden my music opportunities…I constantly wonder where my songs come from. Where does this shit come from? I don’t feel the right to call it my own. I didn’t think of it. I didn’t write it. I merely wrote it down.”

“I’ve been playing about five times a week since I got here. Started at open mikes and have been booking shows from those almost every time. The scene here is a nonpretentious one. People really dig original music, so I don’t have to play as many covers as before, which is amazing. You don’t get paid around here unless you have a massive fan base built up...but I didn’t come here for the money.”

Not that all gigs go smoothly. “The worst gig I've played would have to be at a local restaurant where my PA system kept turning off and on in the middle of my set. It wasn't fixable and the audience members were looking at me like I was nuts.”

Around 2010, Combs moved from OB to Encinitas. As she told the Reader, “My views are a little different now than when I first arrived. I’m actually making a living playing music and have taken the risk of quitting my day job to pursue it.”

In March 2012, Combs began recording a new full-length, Home Is Where the Heart Is, with local reggae legend Tommy Dubs. “The album features eleven songs that I’ve written in the last four and a half years since I’ve been in California,” she says. Guest players include the band Seismic Leveler which includes Doug Kunnath on Keys, and Japheth Ketcham on guitar. Photographer Tiffany Fine shot the album cover photo.

In 2014, she formed Hummingbird Hotel, a duo featuring Combs with David Ornelas from Stranger. Their debut single “Can't Say” was released May 13, 2014.