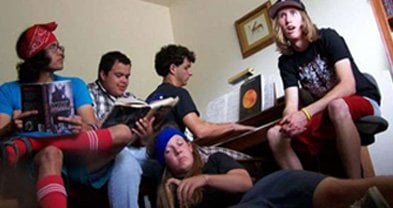 Sound description: Emo experimental grindcore with a touch of electronica.

Meaty Diabetes keyboard player Chad Tomlinson says he and the other four guys in the band have had it with the image-conscious all-age scene.

"They aren't going to shows for the music. They are going for the scene and the look. It's all been taken too far. It's become one big fashion show."

The members of Meaty Diabetes met at Escondido's Orange Glen High School. They played in hard-core and emo bands such as Harmony Grove, Thick and Thin, and Radio Racer before they came together for this project.

"We got our name from a band-name generator we found online," says Tomlinson. "We entered the word 'diabetes' and it came back with Meaty Diabetes. Our full name is Meaty Diabetes and the Battery-Powered Manatee."

Lead singer Matt Jessup says, "It seems to me that music should be about individuality, but it seems like everybody is doing the same thing. If you go to an indie-rock show, everyone looks like they just came out of a thrift store. If you go to an emo show, all the guys are wearing tight girls' pants and white belts. If you go to a hardcore show, everyone is in camouflage pants and black T-shirts. People go to shows not for the music but to show off how they look."

To make their point, the Meaty Diabetes guys have taken a unique approach to costuming.

"Corey [Cooper, guitar] was an M&M," says Jessup. "We wondered why no one ever dressed up like an M&M onstage before."

Other Meaties have appeared as a Chippendale terrorist, a clown, a leathered biker, a Viking, and a dysfunctional basketball player. None of the band's grindcore/jazz/classical/metal songs are over two minutes long. Themes touch on Down syndrome pineapples, wolves with AIDS, and Shamu partying on the moon.

"People tell us our song about a gay dolphin sounds like Gwen Stefani," says Jessup. "[Audiences] see us and they think we're dead serious. If they heckle us, we don't care. Most people get our shows except for the stupid people who don't count in life anyway."