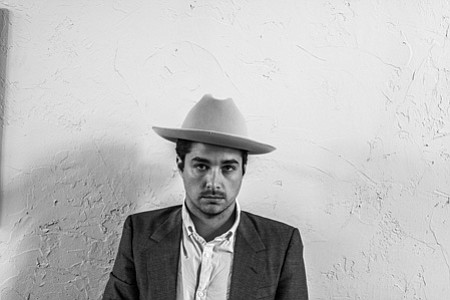 Matthew Logan Vasquez grew up in Texas and along the California coast, later hunkering down for years in Brooklyn as he finessed his music in a more pressurized urban context and then heading back to Austin to put all the pieces together.

After a decade fronting Delta Spirit in San Diego and then performing with Middle Brother (featuring members of Dawes and Deer Tick), Vasquez decided to go solo in 2015. The same year, he moved with his wife, Marthe, from Brooklyn to Austin, and he saw the birth of his first child Thor.

He released his Austin EP, followed by his full-length solo debut Solicitor Returns in February 2016.

His 2017 album Does What He Wants, released via Dine Alone Records, was preceded in January by a single for "Same." "This song is about all the financial difficulty I went through that caused I family and I to move in with my mom for most of 2016," he says. "This song is about confronting adversities in life and how we all go through it." The track also features Kam Franklin of the Suffers.

To record the album, Vasquez built a trailer studio near his home, parked about an hour west of Austin. Surrounded by evergreen oak trees, he wrote and recorded basic tracks and then brought in guests like Shakey Graves drummer Christopher Booshada to add parts as needed. For backup vocals and string parts, he worked long-distance via sound files with the Parkington Sisters, who he performed with during a Middle Brother set at the 2016 Newport Folk Festival. “They performed a miracle, giving me a 3-D depth that makes the tracks they appear on jump out of the speakers,” he insists.

The next single released in February 2017 was "Headed West." When talking about the track, Vasquez said "If you live in California, it's easy to forget what an odd and wonderful place it is. After moving to New York and then Austin, I felt I could really appreciate the facets that I both love and hate." Another move was looming.

The day after Christmas in 2017, Vasquez's wife, and their son moved to Norway to be closer with her Dad, who had been diagnosed with Alzheimer's Disease. Vasquez relocated to Oslo to be with her after completing his next record.

The title of his 2018 album, Does What He Wants, seems to sum up how much he appreciates being freed from the bandleader pedestal, with autobiographical songs that also serve as an aural diary covering the past few years of upheavals, successes, regrets, and missed opportunities.

His third solo album Light'n Up dropped in February 2019 via Dine Alone Records, preceded by a single for "Trailer Park" b/w "Poor Kids." A video for "Trailer Park" was directed by Michael Parks Randa (Deer Tick, Rick Ross, mewithoutYou). The video for "Vacation" was shot on location in Sherborn, MA, featuring local townspeople taking on lead vocals. The album closes with a reflection on his new overseas home, "Oslo," featuring angelic strings played by the Parkington Sisters backing Vasquez's lyrical portrait of his struggle to come to terms with his new life in Norway and all he left behind in Texas.