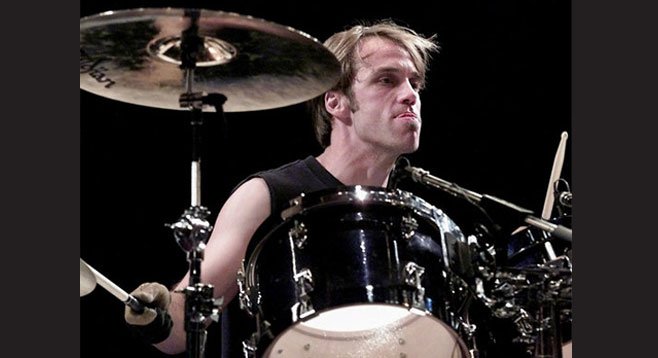 Matt Cameron grew up in San Diego, performing on the soundtrack of the 1978 cult movie Attack of the Killer Tomatoes, by singing the track, “Puberty Love” (a song which makes the titular tomatoes explode!). After graduating high school in San Diego in 1980, he played with the group Fault Line with Glenn Slater, who later moved to Seattle, Washington, and invited Cameron up to visit.

After moving to Seattle himself in 1983, Cameron played with Feedback and Skin Yard, before replacing Soundgarden drummer Scott Sundquist in 1986.

He also wrote and played with the Smashing Pumpkins, Temple of the Dog, and Queens of the Stone Age. After Soundgarden split in 1997, he joined Pearl Jam in 1998, replacing Jack Irons.

While still with Pearl Jam, Cameron has also played with Hater and Conspiracy, as well as touring with the Wellwater Conspiracy with John McBain in 1993. Soundgarden reunited to play Lollapalooza in 2010, leading to a live album, a tour, and a new album.

In 2014, Cameron and fellow Soundgarden member Ben Shepherd joined forces with Alain Johaness (Queens of the Stone Age, Them Crooked Vultures), bassist Ben Shepherd (Soundgarden), and Dimitri Coats (Burning Brides, Off!) to form a new band called Ten Commandos which quickly began recording its debut demos. Their first single "Staring Down the Dust" was released in Autumn 2015, followed a few weeks later by an album from Monkeywrench Records.

Cameron's solo album Cavedweller was released in 2017, preceded by a single for "Time Can't Wait." "It's a hard rock stomper, but got a little psychedelic tinge at the end," says Cameron. "One of my main influences has always been [Pink Floyd co-founder] Syd Barrett, and this song has a weird sort of psychedelia in there like his music." The album includes the rhythm section of drummer Mark Guiliana and bassist Tim Lefebvre, from David Bowie's 2016 album Blackstar.